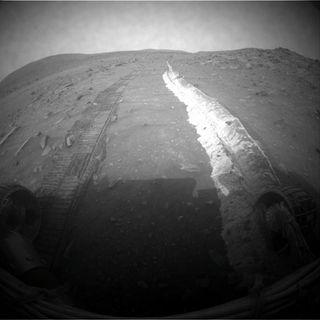 Spirit looks back at its tracks on Sol 1861 of its mission on Mars. Its immobile right-front wheel, which forces the rover to drive backwards, churned up bright soil. The edge of Home Plate forms the horizon on the right side of this image. Husband Hill i
(Image: © NASA/JPL-Caltech)

NASA's MarsExploration Rover Spirit is back on track. The robotic rover drove on Thursdayfor the first time since April 8 after its recent bout of amnesia.

Spirit wasacting on commands from engineers who are still investigating the cause behind Spirit'srecent glitches.

The drivetook Spirit about 5.6 feet (1.7 meters) toward destinations about(about 500feet (150 meters) away. The rover has already operated more than 20 timeslonger than its original prime mission on Mars. Spirit and its twin Opportunity landed on Mars morethan five years ago.

This week,rover engineers at NASA's Jet Propulsion Laboratory in Pasadena, Calif., judged that it would be safe to send Spiritcommands for Thursday's drive. They also anticipated that, if the rover didhave another amnesia event, the day's outcome could be helpful in diagnosingthose events.

Three timesin the past two weeks, Spirit has failed to record data from a day's activityperiod into non-volatile flash memory. That is a type of computer memory whereinformation is preserved even when power is off, such as when the rover naps toconserve power.

"Weexpect we will see more of the amnesia events, and we want to learn more aboutthem when we do," said JPL's Sharon Laubach, chief of the rover sequencingteam, which develops and checks each day's set of commands.

The team isalso investigating two other types of problems Spirit has experienced recently:failing to wake up for three consecutive communication sessions about two weeksago and rebooting its computer on April 11, 12 and 18. Engineers have not foundany causal links among these three types of events.

Spirit hasmaintained stable power and thermal conditions throughout the problem eventsthis month, although power output by its solar panels has been significantlyreduced since mid-2007 by dust covering the panels.

"Wedecided not to wait until finishing the investigations before trying to driveagain," Laubach said. "Given Spirit's limited power and the desire tomake progress toward destinations to the south, there would be risks associatedwith not driving."

The teamhas made a change in Spirit's daily routine in order to aid the diagnostic workif the rover experiences another failure to record data into flash memory.

To conserveenergy, Spirit's daily schedule since 2004 has typically included a nap betweenthe rover's main activities for the day and the day's main downlinktransmission of data to Earth. Data stored only in the rover's random-accessmemory (RAM), instead of in flash memory, is lost during the nap, so whenSpirit has a flash amnesia event on that schedule, the team gets no data fromthe activity period. The new schedule puts the nap before the activity period.This way, even if there is a flash amnesia event, data from the activity periodwould likely be available from RAM during the downlink.

One theother side of Mars, Opportunitycompleted drives of 315 feet (96 meters) Tuesday, 449 feet (137 meters)Wednesday and 95 meters 312 feet (95 meters) Thursday in its long-term trektoward a crater more than 20 times larger than the biggest it has visited sofar.