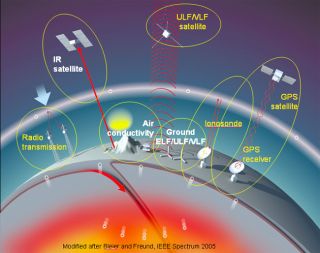 Overview of both space-bound and earth-bound observational techniques that can be used to detect early warning signals from places where stresses build up deep in the Earth’s crust that may lead to a catastrophic earthquake. The techniques labeled in white were used for the analysis of the Alum Rock M.54 earthquake data.
(Image: © Bleier,Freund)

Earthquakesare feared because they seem to strike without prior warning. Seismologists aregood at estimating the probabilityof large earthquakes within timescales of years or decades: ?There is a62.4% probability that one or more earthquakes of magnitude 6.7 or larger willhit the San Francisco Bay Area before 2032?, says a US Geological Surveywebsite. Clearly, we should be able to do better.? In fact, we probably can.

Todevelop an effective earthquakeearly warning system we have to first understand what happens in thehypocenter deep in the Earth, where tectonic forces stress rocks to thebreaking point. My scientific work on positive hole charge carriers, which isdone at the SETI Institute and the NASA Ames Research Center, seems to providea good start.

Laboratory experiments tell us that, when a rock is stressed, itturns into a battery. Something similar must happen in all hypocenters prior tocatastrophic failure.

A battery is a device that can deliver electric currents. However,for a current to flow, the battery circuit must be closed. In other words, if astream of positive holes is to flow out of a stressed rock volume, theelectrons must follow suit.

That's where the difficulty lies. Rocks are hole conductors butcannot conduct electrons. The electrons, co-activated in the stressed rockvolume, have to take a different path. The situation is like in an electrochemicalbattery, where cations flow through the electrolyte but electrons have to hitcha ride through the wire connecting the anode to the cathode.

It appears that, occasionally, the Earth managesto generate powerful electric currents flowing out of the hypocenter,indicating that the battery circuit had closed. The currents flow in pulses.They produce potentially powerful electromagnetic signals at extremely low andultralow frequencies (ELF/ULF).

However, there is a catch: ELF/ULF waves comingfrom below will be totally reflected when they hit the Earth?s surface beyond acertain angle. We don't know yet how large this angle is, but suspect that itis pretty steep. This means that only ELF/ULF waves within a relatively narrowcone will have a chance to makeit through the Earth surface.

To record those ELF/ULF signals directly one hasto be close to the epicenter. This is rare.

At the same time any ELF/ULF waves, which makeit through the Earth?s surface, will be beamed straight up into the ionosphere.Once there, they will spread within the ionospheric waveguide and travel aroundthe globe. Usually, it is hard to tell from where they came.

The moderate Alum Rock earthquake, magnitude 5.4, rattled thesouthern San Francisco Bay in late 2007. For those who experienced it at closequarters, it was a brief, hard jolt. Overall this event was unremarkable ?except that one of QuakeFinder?s CalMagNet stations, which are spread overCalifornia along the San Andreas Fault, was barely 2 km from the epicenter.?

A new paper, just published by ?Natural Hazards and Earth SystemScience,? describes that three suspected pre-earthquake indicators wererecorded by this QuakeFinder station: (i) short bursts of electromagneticradiation, 10-30 sec long, increasing in number over the last two weeks beforethe quake, (ii) a 14-hours long episode of intense air ionization on the daybefore the earthquake, and (iii) a continuous wave of ULF magnetic pulsations,lasting for nearly 1 hour during the time of the most intense air ionization.?In addition, satellites picked up enhanced infrared radiation emitted fromseveral areas around the earthquake site.? Together these observations make astrong case that they are all related to this earthquake BEFORE it struck.

With observations like these the future for earthquake earlywarning looks bright. Once the basic physical processes are understood, we canbring to bear many different techniques, both space-bound and on the ground,each capable of providing a different piece of the puzzle.?

This paper can be downloaded from: