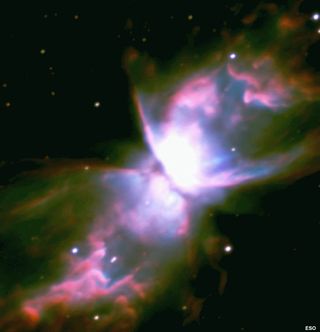 Few objects in the sky have more magnetic personalities than planetary nebulas. Astronomers have been drawn to the strange objects since early telescopes in the 1700s revealed them as fuzzy patches of light that resembled the giant planets of our outer solar system.

More recently, the Hubble Space Telescope and others have produced stunning images of the zoo of bizarre shapes and intense colors these objects display.

A new study seems to confirm one crucial aspect of what's behind the mysterious shapes, that they are sculpted in large part by the magnetic field of the dying star that spawns them.

Planetary nebulas have nothing to do with planets, astronomers eventually learned. Instead, they are distant clouds of gas and dust which, upon close inspection, come in a variety of shapes that even today blow astronomers away.

The nebulas are themselves blown away. Each is the dying remains of a Sun-like star that has expanded to many times its original size and then ejected its outer layers into space.

Here's what's known about how they work:

A wind of charged particles continues to flow from the aged star, and the wind runs into the previously ejected layers, creating shock waves. Radiation from the star ionizes atoms in these outward-racing crash sites. Electrons recombine with the ions and emit light.

But how does the process form such bizarre shapes?

Only 20 percent of planetary nebulas are spherical, with stuff heading out more or less evenly in all directions. Many of the rest take on various versions of the classic hourglass shape. Astronomers call them bipolar. One of the most well known is the Dumbbell Nebula, whose name aptly describes its form. Others are elliptical.

Theorists have assumed that lingering magnetic fields, remains of the days when the central star was normal, shape the outflow. Computer models show this to be the best explanation.

But these magnetic fields haven't been conclusively detected.

Meanwhile, alternate theories have clung to textbook pages. Perhaps a rotating star generates a centrifugal effect on the outflows. Or maybe the stellar wind is distorted by an unseen companion star.

New observations appear to clinch the magnetism case, more or less. A group of German astronomers found magnetic fields around four-out-of-four stars that they examined. Each star anchors a planetary nebula and was a strong candidate to fit the theory.

The observations, made with the European Southern Observatory's Very Large Telescope in Chile, were led by Stefan Jordan of the Astronomisches Rechen-Institut in Heidelberg. The results will be detailed in the journal Astronomy & Astrophysics.

Jordan explained two mechanisms he thinks are at work:

"Charged particles in the stellar wind are trapped along the magnetic field lines, a little bit like iron powder around a magnet in the classical school experiment," Jordan said in an email interview. "The second possibility is that at the stellar surface, the magnetic fields produces an extra magnetic pressure that makes it easier for the matter to leave the star."

Still, other processes are likely involved, he said, so the investigation is far from over.

"Rotation [of the star] may additionally play a role," Jordan said. "Maybe it's a combination of several mechanisms. However, it's very probable that magnetic fields play a dominant role."

And what about those 20 percent of planetary nebulas that are spherical?

"A very good question," Jordan says. "Our unproved hypothesis is that the larger the magnetic field is the larger the deviation from spherical symmetry."

The next step is to look for magnetic fields in spherical nebula to see if they exist and how powerful they are. If the results correlate with the recent observations and mesh with the hypothesis, then the case will be fairly will decided. Those observations are scheduled for June.

Plus, the Greatest Space Images, Volume ...