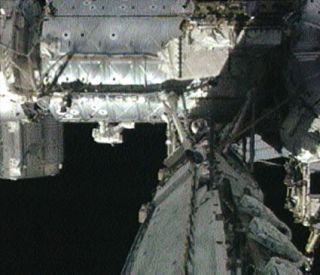 An STS-119 spacewalker works outside the International Space Station at the start of the mission's second spacewalk.
(Image: © NASA TV)

NASA is scrambling to rework plans for the last of three spacewalks by astronauts at the International Space Station after a string of bad luck Saturday ended up in lost time and incomplete tasks, mission managers said.

Topping the list was an incorrectly placed restraint pin that Discovery shuttle astronauts Steven Swanson and Joseph Acaba apparently installed in the wrong position during a Saturday spacewalk, blocking their later attempts to swing out a cargo carrier outside the space station.

The astronauts were able to accomplish most of their planned maintenance chores in what was otherwise a successful spacewalk, but the stuck pin left the cargo carrier in limbo — half deployed and half stowed. Swanson secured it in place with a few tethers and engineers are studying how long the temporary fix should stay in place. The tethers are rated for about three months, mission managers said.

Glenda Laws-Brown, NASA's lead spacewalking officer, said Acaba may have inadvertently left the pin in a position 180 degrees opposite where it was supposed to be, which would have been easy to do in the weightless environment of space. Even when immersed in the giant pool that is NASA's spacewalk training facility, there is still gravity to pull objects up and down, she said.

"That is most likely what happened," Laws-Brown said, stressing that the pin could have been fine had it been installed just a few inches to either side of its final position. "Even with it being installed in the opposite location, he just drew a card of bad luck — so, some days you're lucky, and some days you're less lucky."

Laws-Brown and her spacewalk planning team is now reviewing plans for the third spacewalk of Discovery's mission on Monday to determine which tools and techniques would be best to free the stuck cargo carrier once and for all, should mission managers decide it's a priority. The mistake, she said, will likely not be one spacewalkers make again.

"The good news is they're well trained and will be able to recover," she said.

There were a few other unlucky moments during Saturday's spacewalk.

Swanson found a bad battery in his spacesuit while donning the NASA-issue garment, then found a slight leak in his spacesuit during a leak check before the excursion. Astronauts had to pause in their preparations to reattach a glove to make sure the seal was secure.

Just before starting the 6 1/2-hour excursion, Swanson reported a glitch with his spacesuit's electronic display, which he also overcame after rebooting his spacesuit by shutting down and restarting some systems, including his fans and communications system.

"It was not [his] day when it came to having a clean suit to go outside," Laws-Brown said.

All of the glitches with Swanson's spacesuit were minor and not a concern for Monday's planned spacewalk, Laws-Brown said.

"That suit is good to go," she added.

Late Saturday, mission managers gave Discovery's heat shield a clean bill of health after studying data and images from a pair of inspections by shuttle and station astronauts. Mission Control radioed the good news up to the shuttle's crew.

"Thanks, we really appreciate you passing that along," shuttle skipper Lee Archambault radioed back. "Please thank all the people who did a lot of work to help make that decision."

Heat shield checks are standard practice for NASA shuttle flights since the tragic 2003 loss of the Columbia orbiter and its crew due to wing heat shield damage. A final heat shield inspection to look for new dings from orbital debris will be conducted once Discovery leaves the space station.

Discovery's STS-119 astronauts have passed the midpoint of their planned 13-day mission to the International Space Station. The astronauts delivered a new member of the orbiting lab's crew, the final pair of gleaming solar arrays and a vital spare part for the station's urine recycling system.

The space shuttle is due to undock from the station on Wednesday and land on March 28.