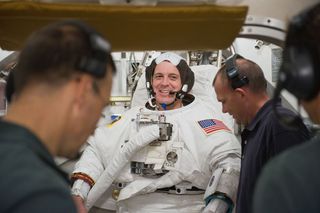 Twoastronauts will venture outside the International Space Station today to helpattach a massive girder that will bring the $100 billion orbital lab up to fullpower.

Discoveryshuttle astronauts Steve Swanson and Richard Arnold II are set tofloat outside the station at about 1:13 p.m. EDT (1713 GMT) in their NASAspacesuits to installthe nearly 16-ton girder and its folded-up solar wings.

?We?reready for a busy day to get that truss attached today,? Discovery astronautJoseph Acaba radioed down to Mission Control this morning.

Swanson andArnold plan to spend 6 1/2 hours working outside the orbital lab to attach the$298 million Starboard-6 (S6) girder and power plant, the last majorAmerican-built piece of the International Space Station. It will be the thirdspacewalk for Swanson and the first for Arnold, who like Acaba is a formerschoolteacher and makinghis first spaceflight.

?I amdefinitely looking forward to going out the door for the first time,? Arnoldsaid before flight.

Today?sspacewalk is the first of three planned during Discovery?s mission. The flightwas initially slated to include four spacewalks and run 14 days, but NASAshortened the mission after a series of launch delays in order to complete theconstruction work before the arrival of a previously scheduled Russian Soyuz spacecraft.That Soyuz is due to launch a new crew and American space tourist toward thestation next week.

The 10astronauts aboard the linked shuttle and space station setthe stage for today?s work on Wednesday. With intricate precision, theywielded robotic arms on both spacecraft to pluck the 45-foot (nearly 14-meter)long girder from Discovery?s payload bay - with only inches of clearance attimes - and park it overnight for today?s installation.

Thespaceflyers will need more of that precision today. Astronauts inside the spacestation will extend the outpost?s Canadarm2 robotic arm about as far its57-foot (17-meter) limb can reach to attach the S6 truss segment. They?ll haveto rely on verbal signals from Swanson and Arnold to guide the new girder intoposition on the starboard-most side of the orbital outpost.

?It?s quitea big choreography going on there,? Arnold said before flight. ?Basically, it?slike backing your car in the garage.?

But this?car? is weighs 31,000 pounds (14,061 kg) and carries two pop-up masts tosupport twin solar arrays that are folded away in thin boxes like a bunch ofoversized maps.

Thestation?s new S6 girder is the final piece of the space station?s 11-segmentmain truss, which at more than 300 feet (91 meters) across will be longerthan an American football field when complete. Each of the two solar arrays atits tip is 115 feet (35 meters) long. They are the fourth set of U.S. solararrays for the space station?s power grid, which generate enough electricity topower 42 average size homes once it is all plugged in, NASA has said.

The spacestation needs that much power to fully support scientific research insidelaboratories and modules from the U.S., Russia, Europe and Japan, as well asmaintain life support for larger six-person crews. The outpost?s current crewnumbers three astronauts, but that is slated to double by late May.

?The mostimportant thing is getting the solar arrays deployed,? Swanson said beforeflight.

Spacestation flight director Kwatsi Alibaruho told reporters late Wednesday thatSwanson and Arnold must secure the new girder in place with four bolts, thenconnect a series of four data and power cables for today?s spacewalk tosucceed. The astronauts also plan to prepare a radiator on the girder to bedeployed, set up the solar wing masts and release a set of restraints and catcheson the boxes containing the folded up arrays.

Shuttlemanagers cleared the heat shield of launch debris concerns aftera detailed inspection and photo survey of its heat-resistant panels andtiles. A final inspection will be performed after Discovery leaves the stationto check for damage from space debris or micrometeorites.

NASA haskept a close eye on the heat shield integrity of its three-shuttle fleet sincethe tragic 2003 loss of the shuttle Columbia and seven astronauts duringre-entry. Damage to that shuttle?s heat shield during launch left it vulnerableto the scorching temperatures of re-entry, which destroyed the spacecraft.

Aside froma minor ding to a tile located well aft on its tile-covered underbelly,Discovery?s heat shield is pristine, mission managers said. Mission Controlradioed the good news up to the shuttle astronauts late Wednesday and suggestedthey?d likely get the chance to unfurl the station?s new wings early.