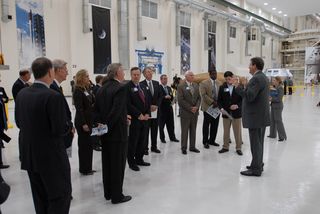 Representatives from NASA, Lockheed Martin, Space Florida and the state of Florida participate in a ceremony at NASA's Kennedy Space Center in Florida to mark the completion of renovations on the historic Operations and Checkout Building high bay for use by the Constellation Program.
(Image: © NASA/Dimitri Gerondidakis)

CAPE CANAVERAL - Officialsat Kennedy Space Center on Monday hailed the completed renovation of anApollo-era facility as a sign that the future of manned spaceflight is takingshape even as NASA prepares to retire the space shuttle.

After a more than$55-million overhaul, the center's Operations and Checkout Building is almostready to house final assembly and testing of the Orion capsule slated tocarry astronauts to the International Space Station, themoon and Mars.

The work is expected to saveabout 400 jobs within a few years and represents a breakthrough for KSC, whichhistorically has only launched vehicles, not built them.

Inside the building'sgleaming white high bay on Monday, mock-upsof the Orion capsule and its heat shield offered the only glimpse ofthe assembly work to come.

But officials said moreevidence of progress was visible across KSC.

The spaceport is preparingfor a Julytest flight of the rocket on which NASA hopes to launch Orion by 2015, witha crew of four to six astronauts.

Pieces of the test rocketare being processed in the Vehicle Assembly Building, and a shuttle launch padis being modified for the new vehicle.

"This is a realprogram," KSC Director Bob Cabana told a crowd of assembled electedofficials and dignitaries on hand to tour the renovated facility. "We havereal hardware here."

The preparations for newlaunch and exploration vehicles come at an uncertain time for NASA and KSC.

And the nation's economiccrisis could scuttle campaign promises to boost NASA funding to limit theprojected five-year gap in manned spaceflight and the loss of 3,000 to 4,000jobs at KSC after the shuttle's retirement in late 2010.

Despite thoseuncertainties, KSC is pressing ahead with post-shuttle plans.

The 70,000-square-foot highbay in the Operations and Checkout Building, or "O&C," was builtin 1964 for integration and testing of Gemini and Apollo spacecraft. In theensuing decades, it was the site of testing for the Apollo-Soyuz and Spacelabmissions and housed surplus equipment.

"It was dark and itwas cluttered and it had miles of abandoned electrical cabling, and thebasement was wet," Harris, of Lockheed Martin, recalled of the facilitybefore renovations began. "Now it looks more like a spacecraft cleanroomoperation."

Lockheed Martin in 2006 wonthe multibillion-dollar contract to build Orion, and with the help of $45million in state incentives brought the final assembly and integration work toCape Canaveral.

Orion's major componentswill be moved around the high bay floor hovering on "air pallets,"reducing the need for frequent lifting with cranes that can lead to accidents.

Tools for connecting thespacecraft to its heat shield are expected to be installed this year.

Pieces of the capsule willbe shipped to KSC from around the country to be readied for launch, and thecrew module will return to the O&C for refurbishment after splashing downoff the coast of California.

Geyer and Harris said theexploration vehicle and the assembly facility were flexible enough toaccommodate any design changes that might arise under new leadership.

Packages proposed by theHouse and Senate include $600 million and $1.5 billion for NASA, respectively,but don't target funds for manned exploration.

"The reopening of thisfacility shows that we are committed to moving forward into the future,"Kosmas said.