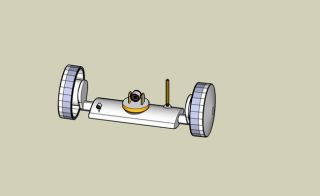 Charlie Masi, of ControlEngineering, has this to say about the two-wheeledJALURO design:

Beingunderslung, it is in stable static equilibrium. Having independently controlledmotors for each wheel, it is fairly simple todrive forward, backward, and to make turns in any direction with any radiusfrom zero to infinity. It really is a neat concept!

The problem is that theunderslung chassis acts like a pendulum or, more precisely, a rocking chair.Notice that the rocking amplitude seems almost random, depending mainly on theshape of any disturbing impulses. The problem is most obvious when the vehiclecomes to a stop. The chassis can be seen to rock forward and back for some timeafter the forward motion ceases. This will be worse on the moon, where there isno damping from air resistance to slow the motion down...

The good news is that thisproblem is apparently surmountable, with an equation of motion that is"fairly straightforward."

FREDNET is the onlyopen-source entry in the Lunar XPrize competition; they have a pretty exciting idea - that space is openfor everyone! Fred Bourgeois describes his vision this way:

"Going for the moon.Open-source. Interested? My dream was about getting into space; exploring,discovering, learning and teaching. To do that, space needed to become moreaccessible. What better way to advance accessibility than through open-sourceand open participation?"

I'm sure there are lunarexploration robots elsewhere in science fiction, but somehow I was reminded ofArthur C. Clarke's spidertripod robot from his 1972 novel Rendezvous With Rama. It is also a"neat concept", and it has some obvious control challenges. (If youthink a three-legged robot is impossible, take a look at the STriDERTripedal Dynamic Experimental Robot .)