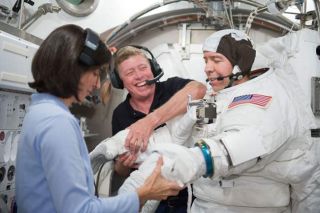 WASHINGTON- The first wave of an astronaut team set to double the International SpaceStation?s population later this year is gearing up for what promises to be abusy mission aboard the orbiting laboratory.

Commandedby veteran Russian cosmonaut Gennady Padalka, the space station?s three-manExpedition 19 crew is training for a planned March 25 launch that will ultimate be followed by another three-astronaut team to bring theorbital lab up to a six-person crew in May.

?Doublingyour crew size means a lot,? said NASA astronaut Michael Barratt, who forms thecore of the joint Expedition 19/20 crew with Padalka, in a Friday briefing. ?Certainly,onboard it means there?ll be a lot of people in line for a small number ofbathrooms, for the exercise equipment, for the galley table. Everything that,essentially, provides support for the crew, we?re going to stretch thoseresources quite a bit.?

Last year,NASA and its international partners attached new European and Japaneselaboratories to the space station, then delivered vitalnew life support equipment - including a second toilet, extrakitchen, astronaut exercise gear and new sleeping berths - to prime the orbitaloutpost for the shift to six-person crews in 2009.

A newrecycling system, which convertsastronaut urine back into fresh drinking water, has been experiencing some hiccupssince its activation last November. A spare part is due to be delivered to thespace station next month during NASA?s planned February flight of the shuttleDiscovery in hopes of fixing the glitch, mission managers have said.

Padalka andBarratt expect to join a third member of their crew, Japanese astronaut KoichiWakata, when they arrive at the station in March. Wakata is part of the shuttleDiscovery?s STS-119 crew and is training for a Feb. 12 launch from NASA?sKennedy Space Center in Florida. He will join the station?s current Expeditoin18 crew until Padalka and Barratt arrive.

Together, thethree spaceflyers will prepare the station for the May arrival of three more astronauts,which will mark the start of a new joint Expedition 20 mission and thebeginning of a series of crew changes that ends with October landing of Padalkaand Barratt.

Padalka, aveteran commander of the International Space Station, said he will take greatcare to preserve the health and psychological well-being of the double-sized crewduring the busy mission.

WhenPadalka and Barratt launch toward the space station in March they will beaccompanied by space touristCharles Simonyi, an American billionaire who is paying about $35 millionfor his second trip to the orbiting laboratory. The trio will blast off aboarda Russian-built Soyuz spacecraft from a launch pad at the Central Asianspaceport of Baikonur Cosmodrome in Kazakhstan.

Simonyilast flew to the space station in April 2007. Both treks stem from dealsbrokered with Russia?s Federal Space Agency by the U.S. space tourism firmSpace Adventures. He paid a reported $25 million for his first 13-day flight tothe space station.