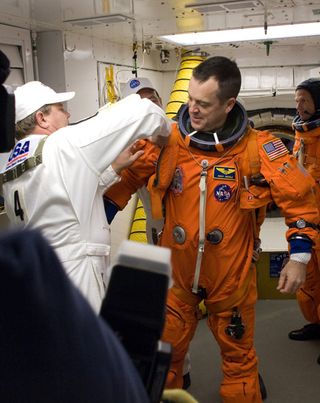 In the White Room on Launch Pad 39A at NASA's Kennedy Space Center in Florida, STS-119 Mission Specialist Richard Arnold (foreground) is helped by the Closeout Crew to put on his harness during TCDT training on Jan. 21, 2009.
(Image: © NASA/Sandra Joseph, Kevin O'Connell, Tom Farrar.)

The sevenastronauts set to blast off aboard NASA?s space shuttle Discovery next monthclimbed aboard their spacecraft Wednesday for a launch dress rehearsal thatended in a mock emergency escape.

Clad inbright orange pressure suits, shuttle commander Lee Archambault and his STS-119crew strapped into their seats aboard Discovery for the traditional preflightreview at NASA?s seaside Pad 39A launch site at the Kennedy Space Center inCape Canaveral, Fla. The astronauts are due tolaunch Feb. 12 to deliver new solar arrays to the International SpaceStation.

?This isreally the culmination of our training, when we get the chance to come out herefor a few days,? Archambault told reporters Monday after he and his crew arrivedat the Florida spaceport from Houston, Texas. ?We did a nice pad flyby onour way in. It?s beautiful to see Discovery out on the pad.?

Thetraining session precedes everyshuttle mission to give astronauts the opportunity to get a hands-on lookat their actual spacecraft and practice emergency launch pad escape plans bysimulating a launch abort just before 11:00 a.m. EST (1600 GMT). During a reallaunch pad emergency, astronauts would zip away from Pad 39A in zip linebaskets, then use the tank to drive out to a safe distance.

Discovery?sSTS-119 astronauts were due to head back to NASA?s Johnson Space Center in Houstonthis afternoon to complete their last few weeks of prelaunch training.Meanwhile, engineers at the Kennedy Space Center shut Discovery?s payload baydoors today for what?s expected to be the final time before the spacecraft?splanned Feb. 12 launch at 7:32 a.m. EST (1232 GMT).

?Right now,there?s nothing hardware-wise or crew-wise that would affect plans for thelaunch next month,? Beutel said, adding that the number of glitches withDiscovery have been extremely low.