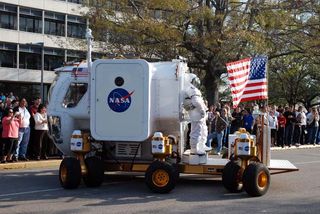 On Jan. 20,1969, NASA rolled out one of its recent space-flown astronaut crews and anexample of the spacecraft developed for its future moon missions for the newPresident of the United States, who was sworn into office that morning.

A similarscene will unfold on Tuesday, 40 years later to the day, as the spaceagency takes part in the inaugural parade honoring President Barack Obama. Itwill be only the second time in four decades when humans who have orbited theplanet have been included in the procession stretching the distance between theU.S. Capitol Building and the White House in Washington, DC.

PresidentRichard Nixon's first inauguration took place six months to the day before thefirst Americans would walk on the Moon, although of course, no one knew it thatday.

That Mondayafternoon, among the many displays, bands and other participants in Nixon'sinaugural parade, was a car carrying three men who represented the futurehistory that was to be made a quarter of a million miles away that July.

"Mymost vivid memory is how cold it was that day," said Apollo 7astronaut Walt Cunningham, of his and his fellow two crewmates open carride down Pennsylvania Avenue. "We waited in the home of a Congressmanuntil the last minute, and then climbed under a car robe and smiled like wewere enjoying ourselves," recalled Cunningham of the 35 degree weatherthat day in Washington, in an interview with collectSPACE.com.

Cunningham,along with Walter "Wally" Schirra, who was one of the original sevenMercury astronauts, and Donn Eisele, who like Cunningham was a first-timeflyer, were the first astronauts to test the Apollo command module in space.Their 11-day, highly-successfulmission in Earth orbit paved the way for Apollo 8, which returned fromthe world's first crewed flight to the Moon three weeks before Nixon'sinauguration.

"Thatwas the last time I saw [the command module] until it was received at theFrontiers of Flight Museum in Dallas," explained Cunningham. The craft wastransferred by NASA to the Smithsonian in 1970 and then loaned to Canada'sNational Museum of Science and Technology in Ottawa, Ontario. The spacecraftreturned to the States in 2004, when it went on display in Texas.

The parade,like the museum exhibitions, was intended to raise support for the spaceprogram.

"Wedid it to generate enthusiasm for NASA, which I believe it did with the public,but not with Nixon," shared Cunningham. "Actually, NASA did not askour opinion in the matter."

In thepresidential parades that followed, NASA was not entirely absent, though itsastronauts were.

Nixon'ssecond parade included a replica lunar rover like the type driven by the Apollo17 crew, the last to walk or drive on the Moon, as a result of decisions madeby the President. The mission had just returned to Earth only a month before.

WilliamO'Leary, a public affairs information officer at the Goddard Space FlightCenter in Maryland, portrayed an astronaut in the 1977 parade for PresidentJimmy Carter, standing on a NASA float. Retiring from NASA in 1985 after 23years of service, O'Leary, 81, died of congestive heart failure in January2008.

Out-goingPresident George W. Bush's first inauguration in 2001 included a model of aspace shuttle in his parade. Two years later with the loss of the first orbiterColumbia, President Bush called for the space shuttle's retirement in 2010.

Thoughastronauts didn't participate in the parades, some have been invited to theinaugural balls. One astronaut in particular, John Blaha, took a 1997 ball forPresident Bill Clinton to new heights by appearing via a taped message that hefilmed from his home for four months on-board the Russian space station Mir.

Blaha hadjust missed being there in-person; he touched down back on Earth two dayslater.

On Dec. 22,2008, the Presidential Inaugural Committee formally invited NASA to take partin the 56th Inaugural Parade, capping thespace agency's 50 year anniversary. At the same time, it was announced thatthe crew of the most recent space shuttle mission would join other NASArepresentatives in the procession.

"Thatwill be a great treat for us, and a great opportunity for NASA," saidSTS-126 commander Chris Ferguson. He will again lead his crew, which includespilot Eric Boe and mission specialists Don Pettit, Heide Stefanyshyn-Piper,Steve Bowen and Shane Kimbrough. Joining them will be Greg Chamitoff, who flewhome with Endeavour and the STS-126 crew after living six months on theInternational Space Station.

They won'tbe the only astronauts, either.

Driving NASA'snew Lunar Electric Rover (LER) down the parade route will be four-timeshuttle mission specialist Michael Gernhardt. The 12-wheeled concept vehiclecan house two astronauts for up to 14 days with sleeping and sanitaryfacilities.

The LERalso has two special ports to which spacesuit-clad astronauts can dockthemselves after a moonwalk, which spacewalker Rex Walheim will demonstrate forPresident Obama.

Pulling upat the presidential reviewing stand at the White House, the plan calls forWalheim to detach himself and step down from the rover, hold up an U.S. flagand salute Obama as a fitting finale to the parade.

"We'llbe somewhere near the end," said Ferguson. "We were told not rightbehind the horses, but close."