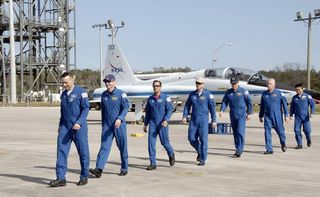 After their arrival at Kennedy's Shuttle Landing Facility the STS-119 crew members head across the tarmac to greet the media for a question and answer session. Photo
(Image: © NASA/Kim Shiflett)

But if a fire or otheremergency forced the seven astronauts from the shuttle's flight deck andmid-deck before a targetedFeb. 12 liftoff, they wouldn't pause to take in the scenery.

Instead, they wouldscramble into slide-wire baskets designed to whoosh them to the safety of aground bunker, a procedure they'll review today during the second of three daysof pre-launch training.

"This is very valuabletraining," mission commander Lee Archambault said Monday morning after thecrew jetted into the space center from Houston. "We've been in trainingfor almost a year, so we're very anxious to get going with the mission."

On Monday, the crewpracticed driving the M-113 turret-less tank they would use to crash through aperimeter fence and flee the launch pad area, if time allowed during anemergency.

Archambault and Antonellialso practiced landing a jet modified to handle like an orbiter on descent.

The training culminatesWednesday with a countdown dress rehearsal that ends with an abort drillseconds before the simulated liftoff.

The astronauts don't expectto have time in their busy schedule to watch today'spresidential inauguration.

Responding to a reporter'squestion, Archambault said he hoped the Obama administration would stick withplans to return astronauts to the moon and Mars on a new spacecraft.

"We'd love very muchfor him to stay the course and press on with the Constellation program,"he said.

Publishedunder license from FLORIDA TODAY. Copyright ? 2009 FLORIDA TODAY. No portion ofthis material may be reproduced in any way without the written consent of FLORIDATODAY.