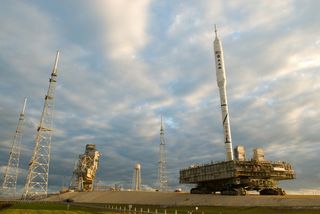 NASA is poised to launch a trial version of its new rocket next week, though the vehicle's ultimate fate is up in the air.

The Ares I-X flight, set to launch Oct. 27 from the Kennedy Space Center in Cape Canaveral, Fla., is a test version of the planned next-generation Ares I rocket, which NASA hopes will ferry humans and cargo to low-earth orbit.

But whether or not NASA will even go ahead with building the Ares I rocket remains to be seen. The space agency is currently awaiting a decision by President Barack Obama's administration about whether to continue on its current course, which includes Ares I, or to move in a new direction.

"Ares I is living on a very thin thread," said John Logsdon, a space policy expert and professor emeritus at George Washington University in Washington, D.C. Logsdon predicted that the rocket does not have a high likelihood of being approved as part of NASA's future plans.

The booster was conceived under NASA's Constellation program to carry astronauts aboard an attached Orion crew capsule to the International Space Station by 2012, to replace the space shuttle fleet due to be retired.

But an independent panel appointed by the Obama administration to review U.S. human spaceflight plans predicts that Ares I won't actually be ready until around 2017. By that time, the space station is set to be decommissioned.

"The committee found that, because of technical and budget issues, the Ares I schedule no longer supports ISS needs," the panel, led by former Lockheed Martin CEO Norman Augustine, wrote in its final report released Thursday.

Logsdon said this means there just isn't much point in Ares I. "You might spend multiple billions of dollars to build a rocket that you're not going to use very often," he said.

Ares I under fire?

The committee suggested encouraging commercial aerospace companies to develop vehicles to carry humans into low-earth orbit, instead of using Ares I to do the job, as they could potentially be ready sooner and might save the government money.

"Everybody is very excited," he said. "We've been working hard to get to this point."

Cowart said he didn't know how the trial launch might affect President Obama's decision but "the thing they can best contribute is to go fly this mission successfully. We're doing everything that we can in order to help make this decision."

Ares I-X consists of an almost-complete first stage — instead of the five segments that Ares I is intended to have, the Ares I-X first stage has four engine segments plus a mock fifth segment. This part of the rocket is based on the twin solid rocket boosters that launch the space shuttles.

On top of the first stage is a simulated second stage and Orion capsule, which are fitted to have the same size and shape as the planned real thing. Consequently, it will fly on a suborbital mission to an altitude of about 28 miles (45 km), rather than to low-Earth orbit.

"There's this widespread impression that it's going somewhere," Logsdon said. "And it's only going to go up and come right back down. It's just a first stage, it's not a whole rocket."

Ultimately, the test flight's significance hinges on whether the rocket it's testing will ever come to fruition.

"Clearly this flight would be of higher value if the Ares I program is going to proceed," Logsdon said.