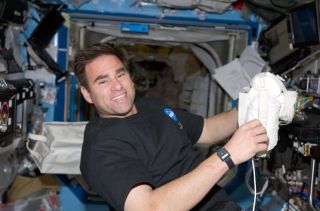 Astronaut Greg Chamitoff, Expedition 17 flight engineer, takes a moment for a photo as he works in the Destiny laboratory of the International Space Station while Space Shuttle Discovery is docked with the station in 2008.
(Image: © NASA.)

NASA astronaut Greg Chamitoff is steadily readapting to life on Earth after spending six months floating in weightlessness aboard the International Space Station.

Chamitoff returned to Earth on Nov. 30 aboard NASA's space shuttle Endeavour to end a 183-day spaceflight, the first of his astronaut career.

"It's much harder to come back than it is to go to space," Chamitoff told SPACE.com Thursday. "For the first three or four days, it was just so overwhelming to cope with it."

"It's great to be reunited with my family," Chamitoff said of his wife Chantal and their fraternal 3-year-old twins Dmitri and Natasha, adding that he enjoys being able to sing to his children at bedtime again. "So it's been great to come back, of course."

Chamitoff launched to the space station aboard NASA's shuttle Discovery last summer to help install Japan's Kibo laboratory, a massive room the size of a tour bus. He served as a flight engineer on the station's Expedition 17 crew, then stayed on to join the current Expedition 18 mission until his replacement arrived aboard Endeavour last month.

While floating in weightlessness was a joy, Chamitoff also treasured the views of Earth from orbit when he stole glances out the window at the close of each day.

"When I looked at the Earth at night and could see the stars everywhere and some cities below, I felt like I was looking at one island," he said. "This is our island and there are other islands everywhere, other planets to go to. And the space station is a place where we can test out and practice everything we need to to be able to make a bigger boat and go further."

A flight to remember

During his mission, Chamitoff worked to activate the Kibo laboratory, celebrated NASA's 50th anniversary in October, as well as Thanksgiving and the space station's 10th birthday a month later. He also voted in the presidential election from space with fellow NASA astronaut Michael Fincke, and waited to hear how his family and home fared in Houston, Texas during Hurricane Ike in September.

"It's kind of ironic that in a sense you're isolated, about as far away from some people on the ground as can be," Chamitoff said. "But on the other hand, you're more connected to people, your family and friends and the world, than ever — I never felt disconnected."

During the hurricane, though, the space station did not have a constant communication line to Earth, Chamitoff said, giving him a sense of what early space explorers experienced without relay satellites.

Chamitoff also took a homemade chess set into space, which he used to trounce Mission Control at the game. He then took on chess champion schoolchildren, who allowed the world to vote for the best moves against the spaceflying astronaut.

"That was a lot of fun," Chamitoff said, adding that he hoped the game encouraged students to pursue space and technology interests. "And it's still going on. The game's not over yet and I'm still hanging in there."