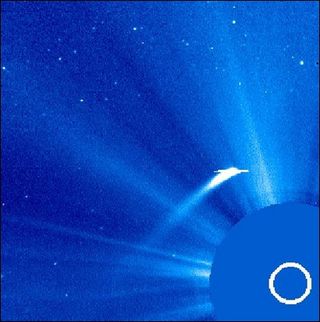 This image taken by the ESA-NASA sunwatching spacecraft SOHO reveals Comet Machholz 1 close to the sun on Jan. 8, 2002. SOHO's coronograph hid the bright sun, the size of which is shown by the inner ring.
(Image: © SOHO/LASCO (ESA & NASA).)

The bizarrechemical make-up of a comet suggests the blob of ice is an interloper, possiblyflung into our solar system from beyond, astronomers now say, adding that thewacky comet is forcing them to create a new category for such objects.

The comet,called Machholz 1, was discovered in 1986 by Donald Machholz of Loma Prieta, Calif. Since then, the icy denizen has made a few appearances, including onein 2007.

"A largefraction of comets in our own solar system have escaped into interstellarspace, so we expect that many comets formed around other stars would also haveescaped," said David Schleicher, a planetary astronomer at LowellObservatory in Arizona. "Some of these will have crossed paths with thesun, and Machholz 1 could be an interstellar interloper."

Theoddball, described in the November issue of the Astronomical Journal,could shed light on the formation and evolutionof comets. These blobs of dustand frozen gases may be the oldest, most primitive bodies in the solarsystem. In fact, they hold the earliest record of material from the nebulathat formed the sun and planets.

Schleichermeasured the amounts of certain carbon and other compounds in the coma or head of Machholz1 in 2007. He compared the composition with information from 150 other comets,finding that Machholz 1 had an odd make-up. Particularly, the comet containsmuch less of a carbon-nitrogen molecule called cyanogen, by a factor of about72, compared with the average found in other comets. The comet also containedmuch less of two molecules called C2 and C3 (which have two and three atoms ofcarbon in their structures, respectively) than the average comet.

Schleicher puts forth three scenarios that could be responsible for theodd chemistry, although no one explanation stands out as right on. "I'mnot real thrilled with any of the three [scenarios]," Schleicher told SPACE.com.

Onepossible explanation is that Machholz 1 did not originate in the solar system,but instead escaped from another star?s gravity. In this scenario, the other star'sproto-planetary disk (the disk of debris from which planets are thought toform) might have had a lower abundance of carbon, resulting in allcarbon-bearing compounds having lower abundances.

Severalcomets previously in our solar system have gotten the boot when their orbitscame into contact with that of Jupiter, whose gravity kicked them out.

Anotherpossible explanation for Machholz 1's anomalous composition is that it formed insidethe solar system but even farther from the sun in a colder or more extremeenvironment than othercomets.

A thirdpossibility is that Machholz 1 originated as a so-called carbon-chain depletedcomet, but that this chemistry was subsequently altered by extreme heat and socyanogen was also depleted. While no other comet has exhibited changes inchemistry due to subsequent heating by the sun, Machholz 1's orbit takes thecomet to well inside Mercury's orbit every five years. (Other comets get evencloser to the sun, but not as often).

"Sinceits orbit is unusual, we must be suspicious that repeated high temperaturecooking might be the cause for its unusual composition," Schleicher said.

However, headded, the only other comet, called Yanaka, to show less cyanogen than istypical never reached such high temperatures.

?Thisimplies that [cyanogen] depletion does not require the chemical reactionsassociated with extreme heat," Schleicher said.

The resultsplace Machholz 1 into a new class of comets. Until now, astronomers haveclumped comets into one of two classes based on their chemical compositions.

Mostcomets, considered members of the "typical" class, have long residedin the Oort Cloud at the fringes of our solar system but are thought to haveoriginally formed amidst the giant planets, particularly between Saturn, Uranusand Neptune. Other members of this class arrived from the Kuiper Belt, a regionof icy objects beyond Neptune (but closer in than the Oort Cloud.)

The secondclass includes comets with varying depletions of certain carbon molecules,including the C2 and C3 molecules. Nearly all of these comets (calledcarbon-chain depleted comets) have orbits that suggest they arrived from theKuiper Belt. For this and other reasons, scientists think the carbon depletionis associated with conditions that existed when the comets formed, perhapswithin an outer, colder region of the Kuiper Belt.

The newclass of comets, which would include Machholz 1 and possibly Yanaka, would becharacterized by low levels of at least three carbon compounds ? C2, C3 andcyanogen. And as of now, these comets would be considered of unknown origin, Schleichersaid.

The comet,now bound in an orbit around the sun, is expected to come into view again in2012, at which time Schleicher expects astronomers will point other instrumentstoward it to measure even more carbon-bearing molecules.

Thisresearch was supported by NASA's Planetary Astronomy and Planetary AtmospheresPrograms.