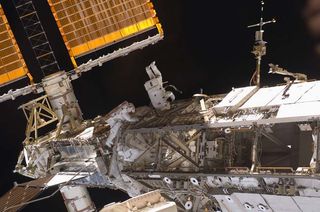 Two astronauts will float outside the International Space Station today to wrap up repairs on a clogged solar array-turning gear during the fourth spacewalk of their mission, which NASA has extended by one extra day due to glitches with the outpost's new water recycler.

Endeavour astronauts Steve Bowen and Shane Kimbrough are due to step outside the station at 1:45 p.m. EST (1845 GMT) on the fourth spacewalk of their shuttle mission to clean the massive starboard-side gear and lube up its port-side counterpart for good measure.

While Bowen and Kimbrough work outside, flight controllers at Mission Control in Houston will continue efforts to solve start-up glitches with the station's new recycling system, which is designed to turn sweat and urine back into drinking water.

Mission Control called up to the docked Endeavour and space station to officially extend their joint 15-day mission by one day to allow more time with the balky machine. The mission will now run 16 days, with landing set for Nov. 30.

"We really enjoy having these guys up here and if we can only extend by one day that will have to do," said space station commander Michael Fincke.

"Hopefully, it will be a good extra day for you guys," astronaut Terry Virts radioed back from Mission Control in Houston.

The water recycler's urine processor has been shutting down earlier than planned. The glitch is apparently due to a sensor's interference with a spinning centrifuge used to distill water from urine, but solving it is vital if the station is to shift to larger, six-person crews next May, mission managers said.

Astronauts removed a set of vibration dampeners from the machine on Sunday in an attempt to fix it. The measure extended the urine processor's performance, but did not appear to completely solve its early shutdown problem.

"It's definitely something we could not have identified while we were on the ground," space station flight director Courtenay McMillan said Sunday.

Monday's spacewalk is the last in a series to perform an unprecedented clean-and-grease-job on the 10-foot (3-meter) wide gear, which rotates the station's starboard solar wings like a paddlewheel so they always face the sun. The gear has been damaged for more than a year, when its lubrication gave out and grinding parts spread metal shavings throughout its delicate turning surface.

"The analogy I like to draw is, we're jacking up the International Space Station and we're taking the wheels off," said Endeavour commander Chris Ferguson on Friday. "And when you do that, you're bound to find a little bit of dust and get a little bit greasy, and we're learning as we go."

On their last three spacewalks, Endeavour astronauts have used mitten-like wipe cloths and grease-spewing guns to clean the gear of metal grit and add a new layer of lubricant. The gear, or Solar Alpha Rotary Joint (SARJ), has 10 new bearings thanks to the orbital work, with an 11th to be installed today. One other bearing was replaced in a separate mission last summer.

Flight controllers had to replan the mission's spacewalks to rely on only one full set of gear-cleaning tools after a $100,000 bag escaped from lead spacewalker Heide Stefanyshyn-Piper during the first excursion last week.

The space station's port side SARJ gear has been working fine since its installation in 2006, but Mission Control wants to have its mechanism lubricated as a preventative measure.

"Having the port side Solar Alpha Rotary Joint and the starboard one working as they're planned will really help us maximize our power," Fincke said Sunday in a series of televised interviews.

In addition to servicing the station's solar array gears, Bowen and Kimbrough plan to tackle a host of other maintenance tasks.

Much of that work is aimed at preparing the space station's Japanese Kibo laboratory for the arrival of a porch-like external platform and Japanese cargo ship next year. They will also snap photos of a damaged radiator outside the station.

Monday's spacewalk will be the third for Bowen, but second for Kimbrough, who admitted last week that he was so focused on his first excursion on Thursday that he didn't take enough to time to look down and marvel at the view of Earth.

"I know it's a beautiful view out there," Kimbrough said.