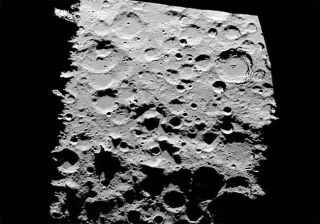 A radar image of the moon's south lunar pole, which shows dark crater regions never illuminated by the sun. Some scientists think water ice or hydrogen deposits may exists in such areas.
(Image: © NASA)

A permanentlyshadowed crater at the moon's south pole has long been suspected of harboring waterice deposits that might be used by future lunar colonists. No such luck, a newstudy suggests.

Scientists have debatedwhether or not these cold craters, constantly shielded from sunlight, couldcontain water ice, which could be melted for drinking water and potentiallyconverted into rocket fuel.

NASA's Lunar Prospectormission (1998?1999) recorded an enhanced signal of hydrogen in these features.Some scientists contend that this hydrogen is in the form of water ice.

ThePentagon's Clementine lunar orbiter (1994) gave positive indications of waterice in one of the cold depressions called Shackleton crater, some scientists think.Others have disputed this interpretation because Earth-based radar of that areareflected a signal more indicative of rock than ice.

New imagesof Shackleton taken by the Japanese lunar explorer satellite KAGUYA(SELENE) support the view that there likely aren't any exposed water icedeposits in the crater.

The imageswere made during lunar mid-summer, when enough sunlight is scattered off theupper inner wall of the crater to provide faint illumination of the inside ofthe crater.

JunichiHaruyama of the Japan Aerospace Exploration Agency and his team analyzed theimages and data. They suggest that temperatures in the crater are less than-297 degrees Fahrenheit (-183 degrees Celsius), certainly cold enough to holdice. But the images reveal no conspicuous brightness that would indicate apatch of pure water ice.

This newanalysis, detailed in the Oct. 24 issue of the journal Science, couldmean that there is no water ice present at all in Shackleton crater, or thatany ice that exists is mixed into the lunar dirt in low amounts, Haruyama andhis team concluded.