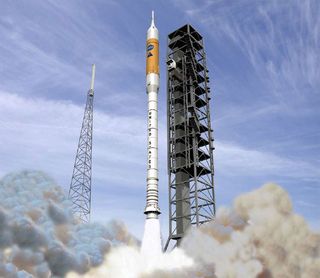 A panel of24 engineers signed off on the preliminary design review of NASA?s Ares Irocket, the two-stage booster for the agency?s space shuttle replacement - the OrionCrew Exploration Vehicle. NASA hopes to launch the first manned tests of rocketin 2014, four years after its space shuttle fleet retires.

?It?s a bigday,? said Doug Cooke, NASA?s deputy administrator for exploration systems, toldreporters after the review. ?It is an important milestone in the explorationeffort.?

Not since1973, when engineers took an early look at the agency?s space shuttle plan, hasNASA performed a preliminary design review for a rocket intended to launchastronauts into space.

?We pokedand prodded ourselves pretty good today,? said Steve Cook, manager of NASA?sAres project at the Marshall Space Flight Center in Huntsville, Ala.

Cook andhis team plan to hold a separate review next summer to revisit plans to addshock absorbers to the Ares I aimed at dampening excessive vibrationsduring launch. A final integrated review of the entire rocket is scheduled forMarch 2011.

JeffHanley, manager of NASA?s Constellation program overseeing Orion and Aresrocket development, said the review process for the Orion capsules has beendelayed from November of this year to some time in 2009 due to funding issues. Fundingchallenges also forced NASA to push back itsinternal target for the first crewed Orion launches from 2013 to 2014 lastmonth.

?We?ve gonethrough a redo of the budget and scheduled and moved the program schedule,?Hanley said. The first unmanned test of the Ares rocket, the Ares I-X launch,is now slated to fly in June 2009 after being delayed from April of that year,he added.

Under NASA?scurrent vision, Orion is slated to beginoperational flights no later than 2015 to ferry six astronauts to theInternational Space Station, with four-astronaut teams due to make the nextmoon shots by 2020. A separate heavy lift rocket, the Ares V, would carry othercargo and the lunar lander for moon missions.

The AresI rocket?s first stage consists of a five-segment solid rocket boostersimilar to the four-segment ones used to launch space shuttles today. The upperstage is powered by a liquid propellant-fueled J-2X main engine derived fromthe engines that lofted NASA?s Saturn 1B and Saturn V boosters during theApollo program.

?This iswhere we really wrapped the entire vehicle together and make sure that we?vegot a sound design from stem to stern,? Cook told reporters. ?It?s really a bigstep in our journey to launch.?

Cook saidthat 10 percent of the questions raised during today?s Ares I review are stillpending resolution, including issues surrounding the separation of the rocket?stwo stages, noise related to the booster?s flight through Earth?s atmosphereand what types of weather to harden the vehicle against during ascent.

?We?d liketo be able to fly though some clouds,? Cook said, adding that his team needs todetermine if Ares I will have to deal with hail or other weather. ?And as well,lightning. Do we need to take a direct lightning strike??

The goal,he added, is to have a rocket a bit hardier than NASA?s current three-shuttlefleet.

?We?regoing to have a much more robust vehicle than the orbiter,? Cook said.