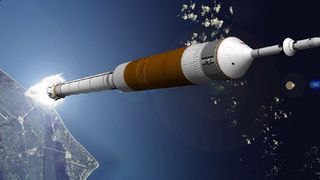 A Crew Exploration Vehicle (CEV) launches atop an Ares rocket in this illustration.
(Image: © NASA/John Frassanito and Associates.)

NASA?sfirst manned test flight of the Orion spacecraft that will replace the retiringU.S. space shuttles won?t launch until 2014, a year later than the agencyhoped, due to funding and technical concerns, program managers said Monday.

JeffHanley, manager of NASA?sConstellation program overseeing the development of the multibillion-dollarOrion crew capsules and their Ares I rockets, told reporters that the agencyremains on target for its March 2015 deadline to bring the new spacecraftonline. But the agency?s internal target of launching astronauts aboard the newvehicles as early as September 2013 has proven untenable due to availablefunding resources.

?This newplan, September 2014, aligns our schedule to what we forecast will be theavailable resources,? Hanley said in a teleconference. ?We are slowing down thework to match and stay under our available funding, and to do that we had to goto a later date.?

NASA?sthree aging space shuttles - Discovery, Atlantis and Endeavour - are due toretire in 2010 once construction of the still unfinished International SpaceStation is complete. The agency plans 10 more shuttle missions, two of whichare set to fly this fall, to finish station assembly and overhaulthe Hubble Space Telescope.

The agencyis replacing its shuttle workhorse with Orion capsules that are designed tolaunch atop two-stage Ares I rockets. The spacecraft are expected to be usedinitially for space station-bound missions and sit at the core of NASA?s vision of returningastronauts to the moon by 2020 with the help of the planned Ares V heavy-liftrockets and Altair lunar landers.

NASAofficials have repeatedly said that March 2015 is the official target to beginoperational manned flights of Orion spacecraft, but the agency is hoping to flythe vehicles earlier to minimize the current five-year gap between their crewedlaunch debut and the shuttle fleet?s retirement.

?We are adheringto our commitment date of March 2015 for initial operating capability,? saidDoug Cook, NASA?s deputy associate administrator for exploration.

The agencyhopes to test Orion?slaunch abort system and fly the first Ares rocket test - Ares I-X - in thefirst half of 2009. But subsequent unmanned abort system and Ares I launchtests before the first crewed flight may see additional schedule slips, programmanagers said.

?Ourconfidence that the gap will get no worse than five years has actuallyimproved,? Hanley added.

A separate reportreleased Monday by the Aerospace Safety Advisory Panel (ASAP), a group thatmonitors NASA performance annually, also stressed the importance of adequatefunding to the success of NASA?s Constellation program.

The panel alsoexpressed concern over what its report described as a lack of clear directionfor the Constellation program, as well as an Orion design process that has focused on minimizingweight by weighing the benefits and drawbacks of each system.

?Whensafety elements have to ?earn their way? onto a design that has already begunto take shape, objectivity and consistency in the decision-making could becompromised,? the ASAP report stated.

But Hanleysaid the preliminary design process for Orion is still under way, with engineersgiving every system for the spacecraft an immense amount of attention. Thegoal, he said, is to refine the design to a final spacecraft that is robust,reliable and safe.

?We are notjust blindly cutting out redundancy or robustness in this design process,?Hanley said. ?I could not be more pleased with the progress we are making.?

?The Orionis headed where it needs to be,? Hanley said.