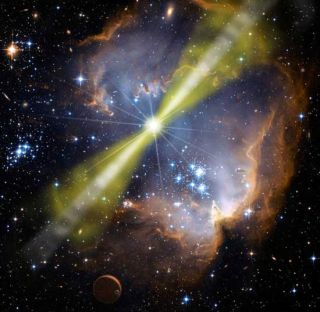 Six months ago, satellite telescopes spotted an exceptionally bright burst of energy that would have been the most distant object in the universe ever visible to the naked eye, if anyone saw it.

Even though no humans have reported seeing it directly, the gamma-ray burst, an explosion that signals the violent death of a massive star, is changing theories of how these events look. Gamma ray bursts are typically accompanied by intense releases of other forms of radiation, from X-rays to visible light.

This burst, dubbed GRB 080319B, was first detected by the Swift satellite on March 19, while the spacecraft was serendipitously looking at another gamma-ray burst in the same area of the sky.

The light it emitted in the visible part of the spectrum was so intense that the burst would have been visible to the naked eye in the constellation Bootes for about 40 seconds — no other gamma-ray burst has ever been visible without a telescope.

The incredible amount of energy given off across the entire electromagnetic spectrum during a gamma-ray burst is what Jonathan Grindlay of the Harvard-Smithsonian Center for Astrophysics calls "the birth pangs of a black hole. This is the scream."

It took the light of GRB 080319B about 7.4 billion years to reach Earth, placing the explosion "more than halfway back to the Big Bang and the origin of our universe," Grindlay wrote in an editorial accompanying a new study of the burst in the Sept. 10 issue of the journal Nature.

This means that the explosion happened 3 billion years before the sun or Earth even formed, Grindlay added. When astronomers see such distant objects, they are in effect looking back in time.

After the Swift detection, telescopes around the world were alerted and trained their eyes onto the new gamma-ray burst, giving scientists a highly detailed view of these explosions — the most luminous in the universe — whose formation and structure still hold many mysteries. The findings in the new study of GRB 080319B challenge some of the commonly-held views of gamma-ray bursts.

A violent death and birth

Gamma-ray bursts are something of an extreme form of supernovas, the bright explosions that mark the deaths of massive stars.

But possibly one in every 1,000 supernovae is not one of these "normal" explosions; instead of the star simply dying, its core collapses to form a black hole — that event generates a gamma-ray burst. (Just what the conditions are that boost a normal supernova into a gamma-ray burst are not known.)

The gamma-ray burst is actually a powerful jet of material sent out by the spinning accretion disk that surrounds a newborn black hole. This bright part of the burst typically only lasts between 3 and 100 seconds, and an afterglow follows that can last for days or weeks.

GRB 080319B's jet was one of the brightest ever observed in terms of gamma rays, and it was unusually bright in optical wavelengths.

"It was unexpected that it was this bright," said lead author of the new study Judith Racusin, a graduate student at Penn State University.

The study suggests that the jet of the gamma-burst actually has two components: a narrow, ultra-fast jet at the core of a wider, slightly slower jet.

The narrow part of the jet of GRB 080319B was so fast that it shot material directly toward Earth at 99.99995 percent the speed of light.

Scientists think that it was because the jet was pointed straight at us that it appeared so much brighter than previously-observed gamma-ray bursts. The researchers speculate that it is rare to detect the inner core of the jet because it is so narrow — only about 1/100th the size of the full moon as seen from Earth.

For this reason, astronomers think they may have missed the narrow core of the jet in previous bursts: "We're primarily just seeing the outer jet," Grindlay told SPACE.com, because we are not seeing those bursts head-on.

Racusin said that it isn't know for sure that all gamma-ray bursts have this two component structure to their jets, but that the theory fits what they saw with GRB 080319B.

To see a similarly bright burst, astronomers would have to catch another one aimed directly at Earth, which Racusin and her colleagues calculated should happen about once ever three to 10 years.

Swift may not still be around in 10 years, but the recently launched GLAST satellite (recently renamed Fermi) and other missions in the planning stages could catch a glimpse of them.