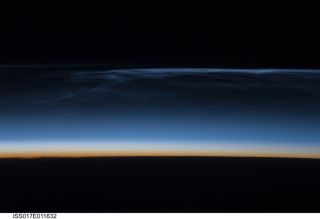 Polar Mesospheric Clouds (also known as noctilucent clouds) are transient, upper atmospheric phenomena observed usually in the summer months at high latitudes (greater than 50 degrees) of both the Northern and Southern Hemispheres. This image was acquired at an altitude of just over 200 miles in the pre-dawn hours of July 22, 2008 as the International Space Station was passing over western Mongolia in central Asia.
(Image: © NASA)

The noctilucent or "night-shining"clouds are at an altitude of 47 to 53 miles (76 to 85 km), where meteors andbright aurora lights are not uncommon and the atmosphere gives way to theblackness of space. The clouds remain a scientifically baffling phenomenon morethan 120 years after their discovery.

"It's lovely," said Gary Thomas, an atmosphericscientist at the University of Colorado after looking at a photo taken from thespace station. "And it shows just how high these clouds really are ? atthe very edge of space."

The clouds form at dizzying heights where the air is onehundred million times drier than the Sahara. By contrast, the commonhigh-altitude cirrus clouds only reach heights of 11 miles (18 km) up.

"We have a fairly good idea that the water vaporfrom below gets transported upwards," Thomas told SPACE.com."That is in essence the fuel."

Part of that water vapor comes from rising air in thetropics, where a few parts per million of water escape into farthest reaches ofthe upper atmosphere. Another likely source of water vapor is methaneoxidation. Methane concentrations have more than doubled over the past 100years, which could explain part of the changes in the high-flying clouds overthe past decades.

People first spotted the noctilucent clouds a few yearsafter the 1883 eruption of the Krakatoa super-volcano in Indonesia createdspectacular sunsets from ash in the atmosphere. Robert Leslie of Southampton,England saw the clouds one evening in July 1885 and published the firstobservations in the journal Nature.

The clouds have since spread from the northern latituderegions such as Scandinavia, Scotland and Siberia to areas farther south.Sightings have cropped up in Washington and Oregon in the United States, aswell as in Turkey and Iran.

Scientists can observe widespread instances of the cloudsthroughout the polar summer. Some clouds even formedafter the fateful launch of the doomed space shuttle Columbia, when 400tons of water from the shuttle exhaust drifted toward the South Pole.

The mystery only thickened after the launchof a satellite dubbed Aeronomy of Ice in the Mesosphere (AIM) in 2007, whenAIM spotted a type of "stealth" noctilucent cloud made of smaller icecrystals less than 30 nanometers (a red blood cell is about 10,000 nanometers).Such clouds appear to stay in the upper atmosphere all the time.

"They're just so tiny that they don't scatter lightefficiently," Thomas said.

AIM has also found a strong resemblance between thenoctilucent clouds and tropospheric clouds that hover near Earth's surface,which suggests that the dynamics of near-space weather may not be incrediblystrange after all.

Researchers speculate that the origin and spread of theclouds is linked to patterns of climate change associated with the modern era.But they are not ruling out a host of other possible factors, includingmethane, carbon dioxide, the number of meteors seeding the upper atmosphere,and even the 11-year sunspot cycle.

"I think the jury's still out on that," Thomas said."We're just trying to understand now how clouds form and how they vary."