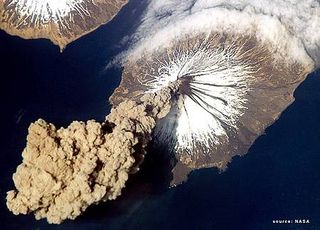 Alaska is a very active area of the Earth.
(Image: © NASA)

Littledid Bucknell University geology professors Craig Kochel and Jeffrey Trop know,as they were working in Alaska, that they would soon predict one of the mostimportant planetary observations ever made.

Thepair was in Alaska for an eight-day trip in July 2006, studying geologicalfeatures and the processes that create them. As they studied photographs takenof the surrounding area, some features caught Kochel's eye. He thought theywere strangely familiar, and then realized they reminded him of images he'dseen when working on the Vikingmissions to Mars in the 1970s.

Kocheland Trop trekked to where the shots were taken overlooking a glacier. Spottingtriangle-shaped landforms called "fans" sealed the deal: They lookedstrikingly similar to photographs taken of features on Mars.

Althoughgeologists can usually tell what shapes the landscape around us, it was amystery what formed the Mars-like features found in Alaska.

Theconditions on Mars are quite different than anything experienced on Earth. Forexample, Mars is much colder than even the Arctic — theaverage martian temperature is -81 degrees F (-63 degrees C) — and theplanet's atmospheric pressure is lower than Earth's. Still, for the samefeatures to be present on Earth and Mars, the two professors suspected similarprocesses would have made them.

Theyhad just over a week in Alaska to discover what created the glaciers and fans.

Duringthis time they managed to see an impressive 289 events, including rock fallsand floods. The vast majority of these events were snow and ice avalanches. Thefrequency of these avalanches astounded the scientists, who reasoned thatclimate change was the most likely culprit. As temperatures rise, the glacierspull back, creating large areas where ice has been separated. Material can falldown these cracks and lead to avalanches. This was creating the features seenin Alaska, and perhaps the same thing had happened on Mars.

Realizingthe importance of this discovery, Kochel and Trop presented their findings to aNASA lunar and planetary science meeting. Their comparisons were based on olderphotographs of Mars, but the HiRISEcamera aboard NASA's Mars Reconnaissance Orbiter was sending back newpictures which further confirmed the idea of avalanches on Mars.

Kocheland Trop explained that with a bit of luck and good timing, it would bepossible to snap photographs of martian avalanches.

Amazingly,soon afterwards the orbiter sent back images of an ice flow avalanche in actionon Mars. Pieces of ice, dust and possibly rocks crashed down from high, steepareas, sending clouds of fine material billowing upwards. The cloud itself wasabout 590 feet (180 meters) across. The exact cause of the avalanche isn'tknown with certainty, but it could be because the sun warmed layers of ice.

Thiswas the first time an avalanche had been observed on another world, and was theperfect confirmation of Kochel and Trop's ideas.

Studieslike this help us understand the changes that take place during periods ofclimate variation. They also show that although planets like the Earth and Marsare very different places, in many ways they can be astoundingly similar.

Thedetails of this paper will also be of interest to astrobiologists. Searchingfor wateron other worlds is thought to be a key step toward finding life, andunderstanding how the water cycle takes place on Mars will help scientists makemore accurate predictions. Couple water with a dynamic world experiencing changesto its landscape, and Mars looks all the more promising for life.

Kocheland Trop's research paper was published in the July issue of the journal Icarus.