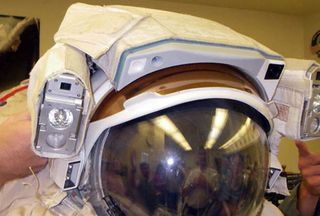 An Orlan spacesuit helmet fitted with cameras for the July 10, 2008 spacewalk.
(Image: © NASA)

TwoRussian cosmonauts will inspect and remove an explosive bolt from the RussianSoyuz spacecraft during a Thursday spacewalk outside the International SpaceStation.

Thespacewalk is slated to begin at 2:20 p.m. EDT (1820 GMT) as part of the ongoingRussian investigation into a malfunction that sent the two previous Soyuzspacecraft off-courseduring reentry. NASA officials have keptclose watch on the proceedings.

?Todate they haven?t come to a conclusive answer as to what was the cause,? said MikeSuffredini, program manager for the space station, at a Tuesday briefing. ?Theycontinue to look at different scenarios.?

Thatleaves U.S. astronaut Greg Chamitoff, the third member of the space stationcrew, to sit inside the Soyuz during the spacewalk. The Pirs airlock that thecrew might normally use to evacuate will be used for the spacewalk, so groundcontrollers want Chamitoff in the Soyuz in case of the unlikely event that theairlock could not be re-pressurized.

Thecosmonauts will ride the Strela hand-powered crane to the Soyuz and putprotective covers on the nearby thrusters to prevent accidental contaminationfrom debris.

Knonenkowill use a knife for the first time during a spacewalk to cut away insulation,which then would allow him to inspect and photograph the area. He will alsoinstall a handrail and cover to protect fluid lines.

Theknife was described as ?serrated with a dull tip? by Bob Dempsey, spacewalkflight director for the space station.

Volkovwill then cut a wire tie between two explosive bolts next to the suspect bolt,and detach an electrical connector before unscrewing the bolt. He will removethe explosive bolt — which has power roughly equivalent to a large M-80firecracker — and place it inside a stainless steel case that should holdagainst any unlikely firing of the bolt.

?Weare very confident that this is a safe operation to do,? Dempsey said.

Suffredininoted that accidental firings of the pyro bolts are unheard of during the Soyuzspacecraft?s operational history. Russian engineers want to examine the boltonce it returns to Earth for any possible signs of space environment damagefrom electromagnetic or plasma forces surrounding the space station.

NASAofficials also dismissed any coincidence between the malfunctions and therecently accelerated production of Soyuz spacecraft. The Russians have begunbuilding more spacecraft to support the jump in the space station?s populationnext year, from three astronauts to a six-person crew.

TheSoyuz will also serve as the only spacecraft capable of ferrying people to andfrom the space station when the spaceshuttle retires in 2010, until NASA?s Orionspacecraft comes online in 2014.

?Wehave a good deal of confidence in their ability to produce those things,?Suffredini said.

Ifthe cosmonauts have time at the end, they will also install a docking target onthe Zvezda service module to prepare for a Russian mini-research module?sarrival on a future mission.

Asecond spacewalk is scheduled for July 15, when Volkov and Kononenko will needto outfit the Russian segment?s exterior, install a scientific experiment andretrieve another.