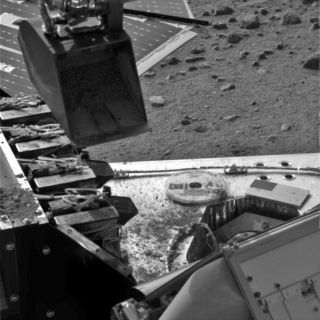 After performing the firstwet chemistry experiment ever done on another planet, Phoenixdiscovered that a sample it dug of Martian dirt contained several solubleminerals, including potassium, magnesium and chloride. Though the data ispreliminary, the results are very exciting, scientists said.

"We basically have found what appears to be therequirements for nutrients to support life," said Phoenix's wet chemistrylab lead, Sam Kounaves of Tufts University. "This is the type of soilyou'd probably have in your backyard. You might be able to grow asparaguspretty well, but probably not strawberries."

Asparagus, which thrives in alkaline soil, would like theMartian dirt, which Phoenix measured to have a very alkaline pH of betweeneight to nine. Strawberries, meanwhile, like acidic soil, he said.

The finding comes a week after the lander discovered waterice in the same dirt.

On June 25, the probe placed a cubic centimeter sample ofMartian dirt in its onboard wet chemistry laboratory for the first time. Thelab, part of Phoenix'ssuite of instruments called the Microscopy, Electrochemistry andConductivity Analyzer, or MECA, was designed to test Mars' dirt for salts,acidity, minerals and conductivity.

After mixing the dirt with water Phoenix brought from Earthin one of MECA's teacup-sized beakers, the instrument measured variouscharacteristics of the solution to learn about the properties of the dirt.

MECA includes four beakers, each of which can be used onlyonce. The inside of each beaker contains 26 sensors designed to study redplanet material, NASA officials have said.

The new findings help fulfill Phoenix's main purpose: tosearch for signs that the red planet's northern polar regions could have beenhabitable to life. The probe landed in the arctic plains of Mars May 25 tobegin what is now a planned four-month mission. It is not equipped to find lifeitself.

The soluble mineral nutrients it found, and the dirt's hospitablepH level, are both promising signs. However the MECA instrument is not able totest for organic compounds, such as carbon, oxygen and nitrogen, which are alsonecessary for life as we know it.

"We did find basically that there's nothing about [thedirt] that would preclude life," Kounaves said. "In fact it seemsvery friendly."

Though the dirt itself seems to be hospitable, Kounavespointed out that the very top layer at the surface is exposed to high levels ofharsh UV light that is damaging to organic compounds, so may not be able tosupport life.

"There could be microbes living meters and metersunderground," he said. "They would be very happy."

Phoenix also recently found another promising sign that thisMars environment could be habitable to life. In a major success last week, theprobe photographed what scientists say mustbe water ice: a few bright crumbs that evaporated over four days from atrench in the ground. The scientists think it's water, and not some othermaterial such as carbon dioxide, because of the time frame over which itvaporized. The local temperatures are too warm for carbon dioxide to remainfrozen for even one day, scientists said.

The probe's oven instrument, the Thermal and Evolved GasAnalyzer (TEGA), also recently completed an experiment in which it heated up asample of Martian dirt to 1,000 degrees Celsius (1,832 degrees Fahrenheit).When the sample was heated, the instrument measured signs of water, whichresearchers think was probably emitted when minerals melted that contained chemically-boundwater. This water would have been bonded to other molecules in the minerals,rather than existing on its own in the dirt.

"This is the first time anybody's ever heated up partof a planet to such high temperatures," said William Boynton of theUniversity of Arizona, lead scientist for TEGA. "When we heated up thesample we got some modest amounts of water vapor. This is what we were hopingto see."

Though further analysis is needed to determine the source ofthe water vapor for sure, "what we can say now is that the soil clearlyhas interacted with water in the past," he said.

The results of both the TEGA and MECA tests are showingscientists that it's possible Mars may indeed have hosted, or be hosting, someform of life.

"Over time I've come to the conclusion that the amazingthing about Mars is not that it's an alien world but that it's actually very Earth-like,"Kounaves said.