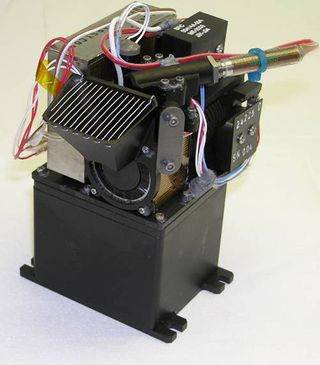 The wet chemistry laboratory on NASA's Phoenix Mars Lander has four teacup-size beakers such as this one. The laboratory is part of the spacecraft's Microscopy, Electrochemistry and Conductivity Analyzer (MECA).
(Image: © NASA/JPL-Caltech/UA)

Scientists plan to use the spacecraft?s wet chemistry lab,part of Phoenix'ssuite of tools called the Microscopy, Electrochemistry and ConductivityAnalyzer, or MECA, to test Mars' dirt for salts, acidity, minerals andconductivity.

In preparation for the experiment Phoenixmelted some iceit brought from earth into liquid water.

"We are good to go," said lead MECA scientist MichaelHecht of NASA's Jet Propulsion Laboratory in Pasadena, Calif. "We madeliquid water on Mars for the first time for our test."

Over the next few days, mission scientists plan to tell theprobe to dissolve samples of Mars' dirt in water inside beakers the size ofteacups. After soaking and stirring, Phoenix will measure variouscharacteristics of the solution to learn about the properties of the dirt.

Phoenix carries four beakers, each of which can be used onlyonce, to study Martian dirt. The inside of each beaker is coated with 26sensors and is designed as a sort of ?electronic tongue? to taste red planetmaterial, NASA officials have said.

"The water in the wet-chemistry cell is frozen, andbefore we do an experiment we have to make sure that it's totally thawed,"Phoenix co-investigator Sam Kounaves of Tufts University, wet chemistry laboratorylead, said. "It's like pouring a known amount of water from a beaker whenyou're doing a chemistry experiment ? you have to use all the water for yourexperiment to work."

Launched in August 2007, Phoenix landed in the northernpolar regions of Mars on May 25 to begin what is now a planned four-monthmission to hunt for buried water ice and determine if the area could have oncebeen habitable for primitive life. The probe carries cameras, a scoop-tippedrobotic arm, weather station and ovens in addition to its wet chemistry lab.

Last week, mission scientists announced that Phoenix?scameras caught a glimpse of water ice evaporating over a series of days in atrench carved by the probe?s robotic arm.

Phoenix is slated to spend today analyzing a scoop ofMartian dirt from a set of trenches, which scientists have christened"Snow White," under its optical microscope.