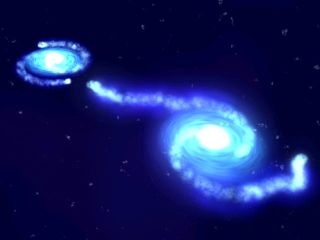 When galaxies interact, such as the two in this artist's conception, they stir up gas and dust that may fuel giant black holes at the galaxies' centers.
(Image: © Kuo et al.)

Astronomers have had their eyes on a certain class ofgalaxies that appear to contain central black holes that gorge on gas and dust.So far, scientists have been unsure what triggers these giant meals, but newradio observations may help explain how they work.

Scientists guessed that recent interactionswith neighboring galaxies might have stirred up Seyferts' gas and dust andpropelled it toward their giant black holes. But when optical telescopesobserve Seyferts in light visible to the human eye, the Seyferts show no signof close encounters with other galaxies.

Now astronomers have used the Very Large Array (VLA)telescope to photograph these objects in radio light, and found that the majorityof Seyferts do indeed seem to have recently collided with a neighbor. For comparison, theresearchers observed non-Seyfert galaxies and found that very few showed signsof an interaction.

"This comparison clearly shows a connection betweenclose galactic encounters and the black-hole-powered activity in thecores," said Ya-Wen Tang, who began this work at the Institute ofAstronomy & Astrophysics, Academia Sinica (ASIAA), in Taiwan and now is agraduate student at the National Taiwan University. "This is the best evidenceyet for the fueling of Seyfert galaxies. Other mechanisms have been proposed,but they have shown little if any difference between Seyferts and inactivegalaxies."

The VLA telescope was able to study the galaxies' hydrogengas by observing the radio waves emitted by hydrogen atoms. The hydrogen gas inmany Seyferts left a clear signal of being disturbed by a collision withanother galaxy.

"Our results show that images of the hydrogen gas are apowerful tool for revealing otherwise-invisible gravitational interactionsamong galaxies," said Jeremy Lim, also of ASIAA. "This is a welcomeadvance in our understanding of these objects, made possible by the best andmost extensive survey ever made of hydrogen in Seyferts."

"The VLA lifted the veil on what's really happeningwith these galaxies," said Cheng-Yu Kuo, a graduate student at theUniversity of Virginia. "Looking at the gas in these galaxies clearlyshowed that they are snackingon their neighbors. This is a dramatic contrast with their appearance invisible starlight."