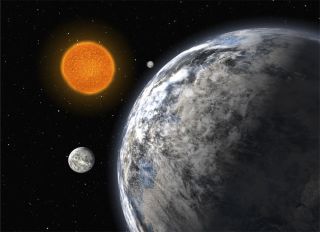 Little morethan a decade ago, astronomers Michel Mayor and Didier Queloz announced thediscovery of a planet in orbit about 51 Pegasi. It rushes around its sun injust over four days, seared to a temperature of 1,000degrees Celsius (about 1,800 degrees Fahrenheit).

Today, wecall this sort of planet a "hot Jupiter." This was the first planetfound orbiting a main sequence star — a star similar to our sun.

Earlier, the irregular beat of a pulsar revealed the cindered remains of planetsorbiting the corpse of a dead star. Most likely, they formed after thesupernova death of their parent star, which indicates that planet formation isa likely outcome from a disk of material. These pulsar planets are not goodplaces to live. But discovering 51 Pegasi around a more ordinary star kickedoff a great planetary gold rush.

Almostweekly, there's an announcement of yet another extrasolar planet around aneighborhood star. This week, it's a triple system ofsuper-Earths discovered at the European Southern Observatory at La Sillausing the HARPS (High Accuracy Radial velocity Planet Searcher) instrument.

The planets, having 4.2, 6.7, and 9.4 times the mass of the Earth, orbit the star with periods of 4.3, 9.6, and 20.4 days, respectively.These short periods place the trio of new planets well within the orbit ofMercury around the sun. So, again, these are hot planets, well inside thehabitable zone of their star. This trio, and others, were announced this weekat the international conference, "Extra-solar Super-Earths," anddemonstrate that small planets are likely common.

"Clearlythese planets are only the tip of the iceberg," says Michel Mayor, team leaderfor this discovery. "The analysis of all the stars studied with HARPSshows that about one third of all solar-like stars have either super-Earth orNeptune-like planets with orbital periods shorter than 50 days."

Theseplanets are like the proverbial gold nuggets sought by the 49ers here in California. They mark the trail to the mother lode, where the ultimate goal is to findanother Earth.

Only ahandful of the 300-plus planets known to exist are categorized as super-Earths.The ground-based radial velocity method preferentially reveals Jupiter-sizedplanets. They induce greater spectral shifts in their stars. Tiny terrestrialplanets the size of Earth hardly disturb their parent stars, and their radialvelocity signatures are lost in the noise.

Super-Earthsare beginning to be found with high-precision instruments like HARPS. Hints ofsmall planets have also been reported by the COROT (COnvection ROtation and planetary Transits) Mission and by thegravitational lensing experiments underway.

But theholy grail — an Earth-size planet in the habitable zone of its star— awaits NASA's Kepler Mission.

The Keplerspacecraft launches in February 2009, 400 years after Johannes Kepler publishedhis first two laws of planetary motion in Astronomia Nova, the "NewAstronomy," which first described planets orbiting on ellipses and atvarying speeds around the sun. Ten years later, he published his third law,which relates the period of the planet to its mean distance from the sun.Kepler used his discoveries to predict solar transits of Mercury and Venus, butdid not survive to observe them.

Soon, NASAscientists will seek transits to discover Earth-size planets about distantstars. And, they named the mission in honor of Johannes Kepler.

The KeplerMission is especially designed to discover small planets around sun-likestars by observing transits. The Kepler Mission will observe more than 100,000stars for at least 3.5 years, seeking evidence of other Earths. Lots of hot,close-in planets will be discovered in the first months of the mission.

FindingEarth-size planets in Earth-like orbits requires patience, because observationsmust be repeated to confirm discoveries. If an alien astronomer in a distantsolar system werelooking for us, Earthly transits would be seen once per year, and that goodastronomer would require at least three transit observations to announce adiscovery. The same is true for the Kepler scientists. Kepler's scientificprospectors should be announcing discoveries of Earth-size planets in habitablezones by 2011-2012.

In myopinion, that's a short wait to answer the question, "Are there other planetslike Earth orbiting distant suns?" We're approaching the mother lode ofdistant solar systems, and the Kepler Mission promises a major advance towardunderstanding whether we are alone in this vast universe.