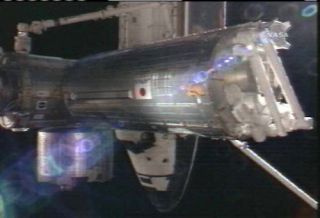 The Japanese Kibo pressurized laboratory extends out to the right from the Harmony node in this image taken by a camera outside the International Space Station on June 4, 2008. The Kibo lab's storage module can be seen as the squat cylinder at the bottom in this view.
(Image: © NASA TV.)

HOUSTON — A giant laboratory aboard the International Space Station (ISS) will get a bit bigger today when astronauts add an attic to the already tour bus-sized Japanese module.

Wielding the space station's robotic arm, astronauts will pluck a storage closet from a temporary perch and attach it to a more permanent home on the roof of Japan's $1 billion Kibo laboratory module.

The move is slated to begin at about 2:57 p.m. EDT (1857 GMT) today, with Nyberg hoisting the storage closet — also known as the Japanese Logistics Module (JLP) — from the top of the station's hub-like Harmony node and moving it about 30 feet (10 meters) to the rooftop of Kibo. The actual move is expected to take less than an hour once vestibules between the rooms are prepared, NASA officials said.

Kibo's storage room was delivered last March during an earlier shuttle mission to await the arrival of its parent module, the Japanese Pressurized Module, which Hoshide and his STS-124 crewmates installed earlier this week.

A porch-like external platform and a second, smaller robot arm to handle external experiments are slated to round out the Kibo facility when they launch aboard a NASA shuttle next year.

To prepare for today's module move, the joint 10-astronaut crew of Discovery and the station removed eight phone booth-sized equipment racks from the storage room and installed them inside the main Kibo lab on Thursday. Two spacewalkers also cleared the lab's roof-mounted docking port to receive the smaller module that day and installed new cameras to aid use of Kibo's robotic arm.

"The JLP needs to be completely empty," Hoshide said of today's move in a NASA interview. "The plan is not to have any racks inside because we're trying not to freeze [them] just in case a heater failed and we can't have the module warmed up."

In addition to moving the storage room, shuttle commander Mark Kelly and station commander Sergei Volkov are expected to discuss their joint mission with reporters on Earth today.

NASA's Mission Control here at the Johnson Space Center roused Discovery's crew Friday with the song "Bright as Yellow" by the band Innocence Mission, a tune chosen especially for Nyberg, who is making her first spaceflight and is the 50th woman ever to fly in space.

"Good morning Discovery, and a special good morning to you today Karen," NASA astronaut Shannon Lucid radioed up to the shuttle.

"Good morning Shannon and everybody in Houston," replied Nyberg, who will be the first person to wield three different robotic arms in orbit during her mission. "Thank you so much for waking us up with that music."