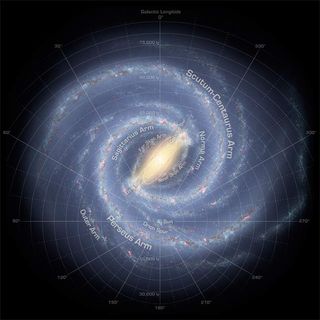 "We'renot proposing that they change the positions of the arms," said RobertBenjamin of the University of Wisconsin, Whitewater. "What we're proposingis a change in the emphasis of thearms." Benjamin will present his team's results today here at ameeting of the American Astronomical Society (AAS).

The resultsare among a handful of presentations at the meeting to paint an evolvingpicture of ourgalactic home base.

For instance, other results presented here by Thomas Dame of the Harvard-Smithsonian Center for Astrophysics (CfA) this week suggest a completely new arm of stars wraps around one side of the galactic center. This new arm is a virtual twin of a known arm on the near side of the galactic center. And another group led by Mark Reid of CfA has identified with more accuracy the location and relative distances of the stars within the spiral arms.

The Milky Way debuted as a spiralcelebrity in 1951 when astronomical morphologist William Morgan of the YerkesObservatory presented his results showing the galaxy's three arms of hot stars,which he were then named Perseus, Orion and Sagittarius.

"Thosewere the first three arms of the spiral galaxy," Benjamin told SPACE.com."Actually, he got a standing ovation at the AAS meeting, which issomething I've never seen."

Beginningin the 1960s and through the 1980s, several groups of scientists used radioastronomy to map out the Milky Way's structure, coming up with various resultson how the spiral arms looked and the number of arms.

"Foryears, people created maps of the whole galaxy based on studying just onesection of it, or using only one method," Benjamin said."Unfortunately, when the models from various groups were compared, theydidn't always agree. It's a bit like studying an elephant blind-folded."

The newsurvey of an extensive swathof the Milky Way was done with NASA's Spitzer Space Telescope, which detectsinfrared light. All objects that emit any heat can be seen in infrared, andthis wavelength penetrates dust, so the new mosaic includes 800,000 snapshotsand more than 110 million stars.

Using astar-counting method, Benjamin and his colleagues noticed an increase in thenumber of stars in the direction of the Scutum-Centaurus Arm, but not in thedirection of the Sagittarius and Norma arms. (The fourth arm, Perseus, wrapsaround the outer portion of our galaxy and cannot be seen in the new Spitzerimages.) The two major arms, according to these findings, are theScutum-Centaurus and Perseus arms.

Thefindings confirm an earlier observation by a team of astronomers, making astrong case that the Milky Way has two major spiral arms, a common structurefor galaxies with bars. These major arms have the greatest densities of bothyoung, bright stars and older, so-called red-giant stars.