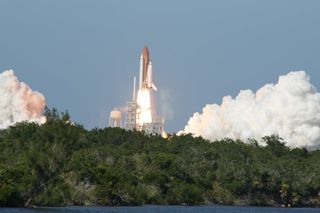 HOUSTON- When the space shuttle Discovery lifted off Saturday, it left some seriousdestruction in its wake.

Strewn allover the seaside Launch Pad 39A area at NASA's Kennedy Space Center in CapeCanaveral, Fla., inspectors found bricks and mortar from the trench designed tocatch the flames that shoot out beneath the shuttle when it launches. Thedebris flew as far as the perimeter fence 1,500 feet (457 meters) away from thepad.

NASAofficials say they are unsure what caused the destruction, the level of whichhas been unseen in previous launches, but they have already assembled aninvestigation team to look into the issue further.

?We?ll gofigure out what caused this much damage and we?ll fix it,? Cain said.

In additionto being unusual, the pad damage is somewhat worrying because NASA has only twoshuttle launch pads and both must be in working order for its nextplanned mission, the STS-125 flight to overhaul the Hubble Space Telescope,to launch in October as planned. Unlike current shuttle flights to theInternational Space Station, where astronauts can take refuge if theirspacecraft is damaged until a new one can be launched, the mission to Hubblehas no such safe haven. So instead, NASA needs a second shuttle on a secondlaunch pad to serve as a rescue ship.

ForSTS-125, NASA plans to prepare a primary shuttle to launch from Pad 39A, aswell as a backup rescue shuttle that would be ready to launch from its otherpad, 39B, if needed.

So givingup on Pad 39A completely is not an option, Cain said. ?We need both launchpads, so that?s not a negotiable term at this point.?

Switchingto Pad 39B as the primary launch pad would also present issues, as this site iscurrently being readied for use in NASA?s next manned spaceflight endeavor, theConstellation program. Ground crews have already begun converting Pad 39B froma shuttle launch site to the liftoff pad for the Ares I rocket, the boosterintended to carry the capsule-based shuttle successor Orion to space.

The lasttime this pad was used for a shuttle launch was on Dec. 9, 2006, for theliftoff of Discovery?s STS-116 mission.

?If ourplan were to go launch again off of Pad B, there would be things we would bedoing that we are not doing and have not been doing,? Cain said. To switchwould, he said, cause ?some aches and pains.?

Both launchpads date back to the days of the Apollo program in the 1960s, so it?s possiblethat the site is just getting old, NASA officials said. It will take moreinvestigation to determine the reason for the destruction, they added.

Despite thepuzzling nature of the issue, Cain said he cannot foresee it causing a delay toeither of the two remaining shuttle flights scheduled for 2008. The shuttleAtlantis is slated to launch toward Hubble on Oct. 8, with its sister shipEndeavour to follow on Nov. 10 on a space station-bound flight.

?I have noreason to believe that we?ll delay the mission in October,? he said. ?I?mcompletely confident that we?ll be able to put the necessary repairs in place.?

Though thedamage may raise questions about future missions, it should not have any effecton the shuttlecurrently flying. Mission managers do not believe any of the flyingwreckage hit Discovery as it was launching to cause harm to the craft.

?We haveseen nothing of any of this debris coming back to the vehicle,? Cain said.?From the standpoint of the ongoing mission, it?s not going to be a concern forus.?

Meanwhile,Discovery?s current STS-124 mission to the space station is going well.Commanded by veteran shuttle flyer Mark Kelly, the shuttle arrivedat the station on Monday to begin about 10 days of joint work to install anew Japanese laboratory the size of a large tour bus, fix the orbiting lab?sspace toilet and swap out one member of the station?s three-man crew.