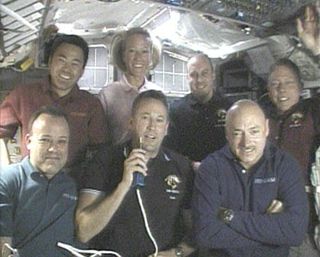 CAPECANAVERAL, Fla. — NASA?s shuttle Discovery and seven astronauts are set to comehome today after delivering the largest laboratory ever launched to the InternationalSpace Station (ISS).

?The mission's coming to an end, but it's going to be good to get home today,? said shuttle commander Mark Kelly.

Kelly andhis STS-124 crew launchedto the station on May 31 and spent nine days installing the massive Kibo lab,a massive cylindrical room the size of a tour bus, and performing threespacewalks to outfit the new module.

?This was abig milestone for Japan and the Japanese community,? said Japanese astronautAkihiko Hoshide, who helped deliver his country?s new lab for the JapanAerospace Exploration Agency. ?Especially the science community, because we nowhave a big lab up there.?

Reisman iscoming home after three months of living and working aboard the space stationand was replaced last week by NASA astronaut Gregory Chamitoff during Discovery?smission.

?I?mlooking forward to being back home, sleeping in my own bed and using my owntoilet,? said Reisman, who is also looking forward to seeing his wife Simoneand family. The station?s Russiancommode broke down near the end of his stay.

Thehomeward bound astronaut also hoped that he?ll have a smooth reintroduction toEarth?s gravity after months living without it.

?I?ve beenvery diligent about keeping up with the exercise regimen in trying to keep mybones and muscles healthy,? Reisman said.

Discoveryhas twoopportunities to land today, beginning with the 11:15 a.m. EDT (1515 GMT)target, which has the best weather forecast of the pair.

To make thefirst landing window, Discovery must fire up its aft-mounted rocket engines at about10:10 a.m. EDT (1410 GMT) in a brief maneuver to begin the descent back toEarth. Light winds and a few clouds are expected at the shuttle?s Runway 15landing site, according to NASA?s Spaceflight Meteorology Group at the Johnson SpaceCenter in Houston.

IfDiscovery cannot land on the first pass, the next opportunity arises at 12:50p.m. EDT (1650 GMT), with an engine burn required at 11:46 a.m. EDT (1546 GMT)to leave orbit. There is a slight chance of rain showers for the secondattempt.

Discoveryhas enough supplies to remain aloft until Tuesday, giving mission managers moreleeway to only target the orbiter?s primary Florida landing site, which is alsohome to its hangar and launch pad.

?I think itjust makes more sense to bring it back home to its place of its origination,?Jones said.

Mission Control roused Discovery's crew early Saturday with the song "Life on an Ocean Wave" by the Merchant Marine Academy band, a tune selected for all seven of the shuttle's STS-124 astronauts.

"This crew has just done a fantastic job," Jones said. "They've accomplished so much on this mission."