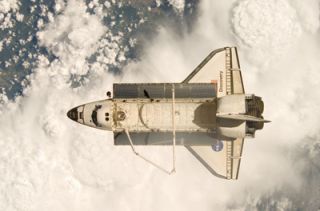 A view of the Shuttle Discovery soon after the shuttle and the International Space Station began their post-undocking relative separation on June 11, 2008. One of the Expedition 17 crewmembers recorded the photo with a digital still camera.
(Image: © NASA.)

CAPECANAVERAL, Fla. - NASA mission managers cleared the shuttle Discovery for aweekend landing Friday after swiftly settling concerns with a lost metal clipthat drifted away from the spacecraft earlier in the day.

Commanded byveteran spaceflyer Mark Kelly, the shuttle is on trackto land on a runway here at NASA?s Kennedy Space Center at 11:15 a.m. EDT(1515 GMT) on Saturday.

Discovery?sseven-astronaut crew is wrapping up a two-week mission to the InternationalSpace Station, where they delivered a new crewmember, spare parts for a Russiantoilet and installed Japan?s $1billion Kibo laboratory. They also performed three spacewalks and attacheda storage room atop the new Kibo lab during the flight.

Engineers,today, gave Discovery?s heat shield a clean bill of health based on imagery anddata from Wednesday scan by the crew using the shuttle?s sensor-tippedinspection pole.

But it wasearly today that Kelly and his crew spotted a shiny, rectangularpiece of metal drifting away from the shuttle?s aft after pushing Discoverythrough a standard - but rigorous - set of thruster and flight control surfaceexercises.

Discoverymission specialist Michael Fossum quickly snapped video and photographs of theobject, which engineers later identified as a small metal clip used to bridgeheat-resistant insulation on the shuttle?s tail during liftoff. Similar clipshave fallen off orbiters in past missions and their loss poses no threat to theorbiter?s landing.

While Kellyinitially estimated it could be up to 1 1/2 feet (0.4 meters) long due to lackof reference, the V-shaped tab was about 2 1/2 inches by 1 inch (6 cm by 2 cm),Cain said. Mission managers are now considering having astronauts stand by withcameras during future checks to quickly rule out similar debris, he added.

In atelevised interview today, Kelly said he was initially concerned over thedebris when it was an unknown object, but had no worries once it wasidentified.

?We wereimpressed at how quickly [and] the quality of work they were able to do,? Kellysaid.

Aprotruding bit of material on the tail rudder also reported by the astronautswas actually part of the shuttle?s thermal barrier and of no concern, Cainsaid.

Discoveryhas two opportunities to land at the Kennedy Space Center tomorrow, thoughthere is a slight chance of nearby rain showers for the second approach at 12:50p.m. EDT (1650 GMT). The shuttlelaunched May 31 and is NASA?s third orbiter to fly this year.

The shuttlehas enough supplies to remain in space until Tuesday, allowing mission managersmore freedom in targeting its primary landing site here in Florida. Should foulweather thwart a Florida return, NASA would activate an alternate landing siteat California?s Edwards Air Force Base, where the orbiter would have to makeuse of a new, shorter runway due to ongoing construction.

But Jonessaid the weather in Florida through Monday is encouraging for Discovery?sreturn to the Kennedy Space Center.