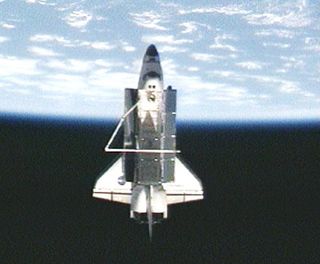 Space shuttle Discovery performs a flyaround of the International Space Station after undocking on June 11, 2008 during the STS-124 mission.
(Image: © NASA TV)

CAPECANAVERAL, Fla. - NASA?s shuttle Discovery is on track for a planned weekendlanding, though the space agency is weighing options for the best way to fix launchpad damage from orbiter?s May 31 blastoff.

?We have aplan to fix Pad A and we have a high degree of confidence in our ability to dothat,? Cain said in a briefing here at KSC.

WhenDiscovery lifted off, the shuttle?s engine plume blasted some 5,300heat-resistant bricks lining Pad 39A?s flame trench away from the launch siteand ripped a 75- by 20-foot (23- by- 6 meter) section away from its concretefoundation. While extensive, the damage is not expected to delay plans to rollthe shuttle Atlantis out to Pad 39A in late August for a planned Oct. 8 launch topay a final service call on the Hubble Space Telescope (HST), Cain said.

?We don?thave any issues relative to being able to do this work and be ready to launchthe HST mission on Oct. 8,? he added.

Launch Pad39A was built between 1963 and 1965 bythe U.S. Army Corps of Engineers to serve as the launch site for NASA?s Apollo missionsatop massive Saturn V rockets. Both are built with brick-lined flame trenchesto deflect rocket plumes and exhaust away from a launching booster.

NASA iscurrently using Pad 39A for ongoing shuttle missions to visit Hubble andcomplete space station construction by 2010, but reserved Pad 39B formodifications related to its shuttle successor - the Ares I rocket and itsOrion crew capsule. The agency does, however, need both pads in working orderfor the October Hubble mission, since a second shuttle must be ready to fly arescue mission in an emergency.

Unlikeshuttle flights to the space station, where astronauts can return to the ISS iftheir orbiter is critically damaged, the Hubble servicing crew cannot becausethe observatory is in a different orbit.

Cain saidmission managers are confident they will be able to fix Pad 39A in time Atlantis?rollout. While the flame trench bricks are no longer made today, a heat-resistantspray material - either coating the damaged site or replacing it entirely - is amongthe repair options under scrutiny.

NASAengineers are also revisiting the construction records for Pad 39A to determineif an epoxy adhesive designed to secure the bricks to their concrete mooringswas meticulously used in the launch site?s initial construction. An initiallook, indicates it wasn?t always, Cain said.

Shuttleofficials plan to meet late this month to determine a more refined repair planfor Pad 39A. Meanwhile, engineers on Earth are completing tapping tests to lookfor voids between the brick and concrete at both 39A and 39B launch sites, Cainsaid.

Up inspace, NASA?s shuttle Discovery appears to be in good health for its plannedSaturday landing. The seven astronauts aboard the shuttle tooksome time off Thursday to catch their breath from their busy orbitalconstruction work while NASA engineers reviewed images and data from the crew?sheat shield inspection a day earlier.

?It lookslike you have a clean orbiter,? NASA?s shuttle Mission Control radioed toDiscovery?s crew from the Johnson Space Center in Houston late Thursday.

Discoverylaunched without the now-standard inspection pole tipped with lasers andcameras that astronauts use to inspect a shuttle?s heat shield while in space.NASA has launched the 50-foot (15-meter) inspection boom, which doubles thereach of a shuttle?s robotic arm, on every shuttle since heat shield damage ledto the loss of the shuttle Columbia and its crew in 2003.

But Japan?sKibo laboratory, a 37-foot (11-meter) cylinder the size of a large tour bus,was too big to fit it and the boom inside Discovery?s cargo bay. Instead, theshuttle astronauts performed a limited scan of Discovery?s heat shield with theorbiter?s robotic arm camera, then retrieved an inspection boom left outsidethe station during a previous NASA mission. They used the boom after undockingWednesday to hunt for any dings along Discovery?s vital wing edges and nosecap.

?Preliminarilythey don?t see any issues or any area of concerns,? Cain said.

Discovery?sSTS-124 mission is NASA?s third shuttle flight of the year to deliver a neworbital room to the space station. The installation of Japan?s Kibo lab leavesthe station about 71 percent complete, with 10 more shuttle flights planned tofinish station construction and overhaul the Hubble Space Telescope before NASA retiresits three-orbiter fleet in 2010.