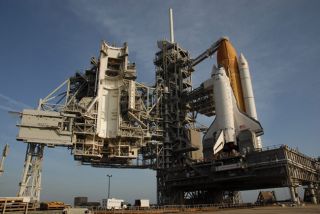 WASHINGTON — House lawmakers have introduced legislationauthorizing three additional space shuttle flights before the fleet's scheduled2010 retirement, including the launch of a science probe removed from themanifest after the 2003 Columbia accident.

The proposed NASAAuthorization Act of 2008 designates $150 million for a space shuttle flight todeliver the Alpha Magnetic Spectrometer (AMS) to the International SpaceStation in 2010.

The Senate CommerceCommittee has not yet introduced its version of the bill, and Congress stillmust appropriate the money needed to add the shuttle mission to deliver theAMS.

The AMS is a U.S.Department of Energy-led experiment, with 16 international partners, to measurecharged particles outside Earth's atmosphere. NASA agreed in 1995 to launch AMSaboard a space shuttle to the space station, but constraints resulting from the Columbia accident, including atwo-and-a-half year suspension of flights, pushed AMS off the manifest.

The experiment has widesupport from members of Congress, who frequently have asked NASA to try andfind a way to fit AMS in. In the bill that funded NASA for this year, Congressdirected the agency to study the matter.

NASA responded in aFebruary report to the House and Senate appropriations committees that the twocontingency flights are fully loaded with large spare parts that only theshuttle can transport to the space station. Adding a space shuttle flight in2010 would cost between $300 million and $400 million, the report said, andkeeping the space shuttle flying in 2011 would cost between $2.7 billion and $4billion.

"In summary, theexisting space shuttle flight schedule, and potentially up to two contingencylogistics flights, may be achievable before the [space shuttle's September]2010 retirement. However, the program does not have a significant amount ofmargin to accommodate an additional flight for AMS without significant impactsto future exploration goals, cost, and possibly safety," the report said.

The authorization billsets a $19.2 billion NASA budget for 2009, a $1.9 million increase over 2008.In addition to that figure, the bill seeks $1 billion to accelerate NASA'sspace shuttle replacement vehicles: the Orion crew capsule and Ares1 rocket. NASA officials have said they could speed development of thosevehicles by about two years — to 2013 — with an additional $2 billion.

The bill also extends thepossibility of U.S. participation in the international space station for four additionalyears by directing NASA to "take no steps" that would prevent the United States from utilizing the space station after 2016.