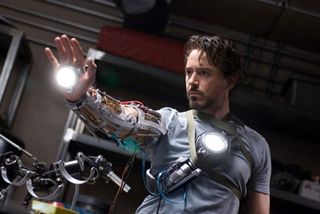 "They say the bestweapon is one you never have to fire," Stark tells a group of militaryofficers in the "Iron Man"film that opens today. "I prefer the weapon you only have to fireonce."

The Marvel comic book character'ssuit embodies a futuristic technology that may enhance human capabilities inwar, but the current battlefield belongs to a growing swarm of unmannedaerial vehicles (UAV) and robots that could someday give even Iron Man arun for his money. UAVs clocked more than 500,000 hours in the air by thebeginning of 2008, performing many of the tasks normally done by pilotedaircraft.

"There's a scene ofIron Man flying against [F-22] Raptors," said Pete Singer, BrookingsInstitute defense expert and author of the forthcoming book "Wired forWar." "Those are among the last generation of manned fighterjets."

Someone still needs todevelop and sell those manned or unmanned technologies, and that's where Starkmight be the new face of military contractors. Private individuals andcompanies might not be as visible as UAVs soaring above the skies of Afghanistan and Iraq, yet their role has grown just as dramatically during therecent conflicts.

Tony Stark, played by RobertDowney Jr., is based partly on real-life wealthy industrialist HowardHughes, who lent his eccentric genius and financial resources to oddball U.S. military efforts during World War II and the ColdWar.

Hughes built and pilotedmany of his own aircraft, including the Hughes H-1 Racer that he flew to set atranscontinental airspeed record in 1937.

"He was really doing thissort of thing even before there was a military-industrial complex," saidAlex Roland, military historian at Duke University. He compared Hughes to a"one-man Halliburton empire," referring to one of the largest defensecontractors currently working in Iraq.

The military-industrialcomplex really took off in the 1950s as the United States sought new weapons and technologies for its growingmilitary, which gave Hughes and other military contractors a market to selleverything from helicopters to satellites.

Yet some Hughes projectscontracted by the military simply fizzled. The all-wood "SpruceGoose" remains the largest plane ever built; it was meant to carry troopssafely across the Atlantic during World War II, but wascompleted after the war and flew just once. Another effort that founderedinvolved building a secret ship that could raise a sunken Soviet nuclearsubmarine from the bottom of the Pacific.

Such doomed investmentswere just one symptom of the troubles that plagued the early military-industrialcomplex. A "revolving door" allowed military officers to joincompanies that they had just awarded defense contracts to, while privateexecutives went to work for the Pentagon and funneled contracts back to theircompanies, Roland said. He added that tightened regulations now prevent many ofthose earlier abuses of the system.

Still, those powerfulinterests combined with the cry of "how much is enough for defense?"during the Cold War to make a seemingly irresistible call for bigger andpricier weapons, according to Roland.

And the military-industrialcomplex remains hungry today for increased funding. Private companies are eagerfor contracts, the military looks for next-generationweapons, and some in Congress jockey for new defense-related jobs for theirdistricts.

"That's how Dad didit, that's how America does it and it's worked out prettywell so far," Stark says in the movie.

Roland observed that U.S. military spending has gone up and down in cycleslargely unrelated to the constant pressure from the military-industrialcomplex, with spikes in 1940, 1960, 1980 and again during the Bushadministration.

The trouble arises when thesense of national urgency that accompanies those spikes can lead to relaxedgovernment oversight, just as millions of new defense dollars suddenly becomeavailable and companies rush in. Such has been the case with the latest boostin military spending, Roland said.

However, there's now theadditional twist of reduced competition among contractors.

"From 1986 to 2006,the number of Pentagon prime contractors competing on major defense programswent from twenty to six," said Singer, the Brookings Institute defenseexpert. "There's often just two going at it, competing on both sides of[contract] bundles, so that they win no matter what."

That reduced competitionamong major contractors may contribute to problems of inefficiency, Singersaid.

Budget overruns and delaysfor weapon systems appear to be the rule. The Government Accountability Officefound that 95 major defense systems exceeded their budgets by $295 billioncollectively in a March 2008 report, including an upgraded version of the F-22Raptors that duel with Stark in "Iron Man."

But even noncompetitive,no-bid contracts are "perfectly legitimate under certaincircumstances," said James Jay Carafano, senior fellow at the HeritageFoundation and retired U.S. Army Lt. Colonel. The U.S. military awarded such contracts to get on a warfooting quickly and invade Iraq.

Corruption and waste amongcontractors and local officials in Iraqcaused the Special Inspector General for Iraq Reconstruction to deem theproblem the "second insurgency" in 2007, according to the AssociatedPress.

"There's minimalcompetition with very few eyes and ears watching the contracting," Singernoted. "Should you be surprised to be billed for one hundred guys workingon a site, if you never visited to see if there were even ten?"

Singer blamed thegovernment for acting like a "stupid client." Carafano agreed, addingthat the sudden flood of military spending resulted in poorly defined contractshastily given out.

"It's not about greedycontractors, it's not about backdoor deals, and it's not about politiciansmaking sure certain companies get contracts," Carafano said. "It'sabout the government not being a very good customer."

Who is on the frontlines?

Whatever happens, no one questionsthat the United States could not fight a war now withoutoutsourcing to military contractors.

"Do you always getvalue for your money? Not always, but generally, yes you do," Carafanosaid. "These wars wouldn't be possible without private sectorsupport."

"Companies don't justbuild the weapons of war, they provide the personnel to use it," Singersaid. "They provide the service side of war. That's a pretty historicshift."

The change amounted to morethan 180,000 Americans, Iraqis and other nationals working as privatecontractors in Iraq as of July 2007, exceeding the 163,000 U.S. troops there atthe time. Some of those contractors necessarily carry guns in their line ofwork.

Movie audiences probablywon't be troubled by Iron Man dealing outvigilante justice, but experts question how to hold military contractorsaccountable for their actions if things go badly. Private individuals work in amurky area where no law seems to apply, leading to incidents such as the shootingof Iraqi civilians by guards working for the private military company Blackwater.

"Every human endeavorhas bad apples, and that's true whether you're talking about the real world ora comic book world," Singer said. "But do you have a system in place toensure that the bad apples are punished?"

There's no need to worryabout Tony Stark, though. He is, by cinematic definition, one of the good guys.