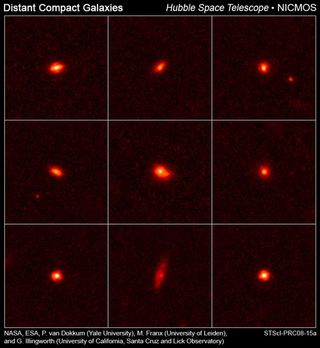 These images taken by NASA's Hubble Space Telescope show nine compact, ultradense galaxies as they appeared 11 billion years ago. The galaxies are only 5,000 light-years across and yet are 200 billion times more massive than the Sun.
(Image: © NASA, ESA, P. van Dokkum (Yale University), M. Franx (University of Leiden), and G. Illingworth (University of California, Santa Cruz and Lick Observatory))

Several newfound galaxies seen as they existed when the universe was young are packed with improbable numbers of stars.

Each of the newly studied galaxies weighs about 200 billion times the mass of the sun yet is a mere 5,000 light-years across. Our Milky Way Galaxy stretches across 100,000 light-years of space.

The compact galaxies have been furiously forming stars; each contains as many stars as a typical large galaxy of today, the new observations reveal.

"Seeing the compact sizes of these galaxies is a puzzle," said Pieter G. van Dokkum of  Yale University, who led the study. "No massive galaxy at this  distance has ever been observed to be so compact."

Since no modern galaxies, that is galaxies in the nearby universe, are so compact, the scientists assume compact galaxies from the early universe must have gotten much larger as they matured beyond the snapshots of ancient time now being studied. But nobody knows how.

"They would have to change a lot over 11 billion years, growing five times bigger," van Dokkum said. "They could get larger by  colliding with other galaxies, but such collisions may not be the complete answer."

Astronomers used NASA's Hubble Space Telescope and the W.M. Keck Observatory on  Mauna Kea, Hawaii to make the new observations, which were announced today and were detailed in the April 10 issue of the Astrophysical Journal Letters.

Van Dokkum and his colleagues had previously studied the galaxies in 2006 with the Gemini South Telescope  to determine their distances, and showed that the stars are a half a billion to a billion years old.  The most massive stars had already exploded as supernovae.

One reason these galaxies were so dense, van Dokkum suggested, involves  the interaction of dark matter and hydrogen gas in the nascent universe. Dark matter is an  invisible form of matter that accounts for most of the universe's mass. Shortly after the  theoretical Big Bang, the universe contained an uneven landscape of dark matter. Hydrogen gas  became trapped in puddles of the invisible material, the thinking goes, and began spinning rapidly in dark  matter's gravitational whirlpool, forming stars at a furious rate.

Based on the galaxies' mass, the astronomers estimated  that the stars are spinning around their galactic disks at roughly 890,000 to 1 million  mph (400 to 500 kilometers a second). Stars in today's galaxies, by contrast, are  traveling at about half that speed because the setups are larger and rotate more slowly.