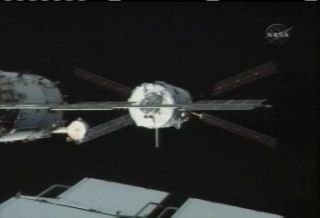 A camera outside the International Space Station caught this view of the arriving European cargo ship Jules Verne during its docking on April 3, 2008.
(Image: © NASA TV.)

Using twoof its four main engines, the ATVJules Verne pushed the 308-ton orbital complex for a period of 12.5minutes, increasing its speed by just over 8 feet (2.65 meters) per second andraising its altitude by 2.8 miles (4.6 km). The ATV consumed 537 pounds (244 kg)of its fuel in performing the task.

Thestation?s orbit of around 211 miles (340 km) regularly degrades from theeffects of residual atmosphere at that altitude.? Named after the famed 19th centuryFrench science fiction author, the Jules Verne cargo ship is scheduled to raisethe station?s orbit on three more occasions in June, July and August. Russia?s unmannedProgress supply vessels are also is capable of boosting the station?s orbit, asare the U.S. space shuttles of NASA.

The19,000-kilogram ATV dockedto the station on April 3 loaded with food, fuel, water and other suppliesfor the station?s crew. Once its mission is completed in August, it will beloaded with garbage, separated from the station and burned up over the SouthPacific Ocean as it re-enters the atmosphere.

At leastfour other ATV vehicles will be launched aboard European Ariane 5 rockets atregular intervals in the next seven years as part of a barter arrangement withNASA in return for European use of the station?s resources. Europe?s Columbuslaboratory was attached to the space station in February following itslaunch aboard a U.S. space shuttle.