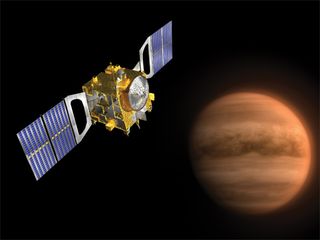 Venus may harbor active volcanoes that produce the highamounts of sulfur dioxide in its atmosphere.

Scientists debate whether the sulfur dioxide detected by theEuropean Space Agency's VenusExpress comes from recent volcanic eruptions, or simply lingers on fromeruptions that happened as far back as 10 million years ago.

Sulfur compounds don't stay long in Earth's atmospherebecause they eventually react with the planetary surface, but they may takelonger to react with surface rocks on Venus.

VenusExpress used spectroscopy to analyze how the Venusian atmosphere absorbs starlightand sunlight, which indicates the type of atoms and molecules in theatmosphere. The spacecraft watched as the sulfur dioxide in the upperatmosphere dropped by two-thirds over several days.

?I am very skeptical about the volcanic hypothesis,? said Jean-LoupBertaux, a Venus Express principal investigator from the French AeronomyService. ?However, I must admit that we don?t understand yet why there is somuch SO2 [sulfur dioxide] at high altitudes, where it should be destroyedrapidly by solar light, and why it is varying so wildly.?

"With VIRTIS, we monitor sulfur dioxide at an altitudeof 35-40 kilometers (21-24 miles), and we have seen no change larger than fortypercent on a global scale over the last two years,? said Giuseppe Piccioni, VIRTIS co-principal investigator in Rome.

Scientistshope they can confirm or disprove active volcanoes on Venus, either by lookingfor local plumes of gas rising from volcanoes or finding hot spots on thesurface that suggest fresh lava flows. That only adds up to more work ahead forVenus Express.