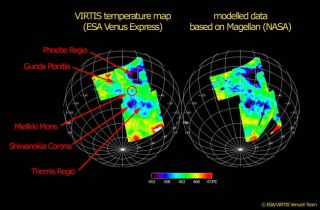 VIRTIS lookedthrough the thick carbon dioxide curtain surrounding Venus and detected theheat directly emitted by the hot rocks on the ground. The instrument made useof the so-called infrared spectral "windows" present in the Venusianatmosphere. Through these windows thermal radiation at specific wavelengths canleak from the deepest atmospheric layers, pass through the dense cloud curtain,and then escape to space, where it can be detected.

On Venusthere are no day and night variations of the surface temperature. The heat isglobally trapped under a thick carbon-dioxide atmosphere, with pressure 90times higher than on Earth. Instead, the main temperature variation is due totopography.

Just likeon Earth, mountain tops are cooler, whereas the lowlands are warmer. The onlydifference is that on Venus cold means 837 degrees Fahrenheit (447 degreesCelsius), while warm means 891 degrees Fahrenheit (477 degrees Celsius). Suchhigh temperatures are caused by the strongest greenhouseeffect found in the Solar System.

The VIRTISresults represent a major step forward in our attempt to identify specific featureson the surface of Venus, said J?rn Helbert from the German Aerospace Center's (DLR) Institute of Planetary Research in Berlin, Germany. "By peelingoff the atmospheric layers from the VIRTIS data, we can finally measure thesurface temperature."

Theresearchers hope to identify volcanoes on the surface of Venus. In the SolarSystem, besides Earth, activevolcanoes have been observed only on Io, a satellite of Jupiter, on Neptune's satellite Triton,and on Saturn's moon Enceladus.Venus is the most likely planet to host other active volcanoes.

Thefindings were presented today at the annual fall meeting of the AmericanGeophysical Union in San Francisco.