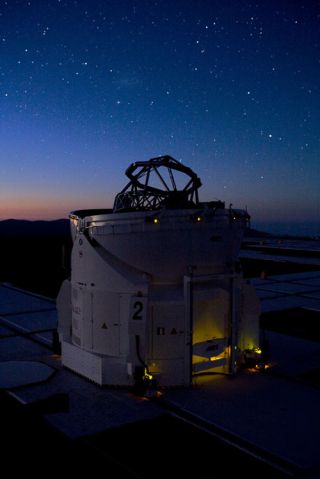 James Bond's next nemesis may be hiding out among astronomers.

Scenes for the next Bond movie, "Quantum of Solace," will be shot at one of the world's premier telescope sites, the European Southern Observatory's Very Large Telescope (VLT) in Chile.

The mountaintop location's otherworldly landscape caught the attention of the film's director. The VLT, which includes four giant 27-foot (8.2-meter) telescopes, sits atop the 8,530-foot-high (2,600-meter) Cerro Paranal mountain in the Atacama Desert.

The high-altitude site and extreme dryness make excellent conditions for astronomical observations, because there is less air and less moisture in the air to refract incoming light from faraway cosmic objects.

The setting resembles Mars with its red sand and lack of vegetation.

"We needed a unique site for a unique set of telescopes, and we found it at Paranal," said Andreas Kaufer, ESO's Paranal Director. "We are very excited that the Bond production team have also chosen this location."

The excellent astronomical conditions at Paranal come at a price, however. In this forbidding desert environment, thought to be the driest on Earth, virtually nothing can grow outdoors. The humidity drops below 10 percent, there are intense ultraviolet rays from the sun and the altitude leaves people short of breath. Living in this extremely isolated place feels like visiting another planet.

To make it possible for people to live and work there, a hotel or "Residencia" was built at a base camp, allowing an escape from the arid outside environment. Here, returning from long shifts at the VLT and other installations on the mountain, visitors can breathe moist air and relax, sheltered from the harsh conditions outside. The Residencia includes an enclosed tropical garden and pool under a futuristic domed roof, giving its interior a feeling of open space within the protective walls.

This unique building serves as the backdrop for the James Bond filming.

"Quantum of Solace" producer Michael G. Wilson said: "The Residencia of Paranal Observatory caught the attention of our director Marc Forster and production designer Dennis Gassner, both for its exceptional design and its remote location in the Atacama Desert. It is a true oasis and the perfect hide-out for Dominic Greene, our villain, whom 007 is tracking in our new James Bond film."

Further action will take place at the Paranal airstrip.

After leaving Paranal, the film crew will shoot in other locations close to Antofagasta. Other sequences have been filmed in Panama, and following the Chilean locations, the unit will travel to Italy and Austria before returning to Pinewood Studios near London in May.

"Quantum of Solace" will be released in the United States and internationally Nov. 7.