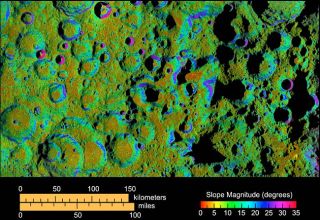 Starting from a wide area map of the lunar South Pole, the scientists progressively zoomed in on the region around Shakleton Crater.
(Image: © NASA)

Earthlings have mapped the moon's surface for the past 4,000 years, but NASA's latest view is the best yet.

Scientists have created a new map of the south lunar pole with Earth-basedtelescopes that is 50 times more detailed than the last version, created withdata from the Clementine spacecraft in 1994.

"This data is the highest resolution and the highest accuracy that'sever made of lunar south polar region," said Scott Hensley, a scientist atNASA's Jet Propulsion Laboratory (JPL) in Pasadena, Calif.. Hensley and othersannounced the new map from the third Space Exploration Conference in Denver.

In detail of 215 square feet (20 square meters) per pixel, the map showscraters four times deeper than the Grand Canyon and hundreds of miles wide.

"It has some of the mostincredible topography in the entire solar system," said Eric de Jong,also at JPL, of the region.

NASA officials said they'll use the new map to scout the rugged terrain forrobot or human landing sites, as well as investigate some longstanding lunarmysteries.

Many of the craters imaged have never seen direct sunlight because of theirdepth and location.

Such permanently shadowed areas, some scientists think, are prime spots tosearch for water iceor hydrogen deposits that would normally evaporate into space from solarheating. Other observations have suggested something's there.

Whether or not the deposits spacecraft have detected are water ice or hydrogen,such lunar caches could become valuable energy, air and water for visitingastronauts.

"The image[s] ? will help us figure out where we want to go," saidKelly Snook, a lunar scientist at NASA Ames in Moffett Field, Calif., of futurelunar exploration missions. "They also provide us with unique ability toanswer the fundamental science questions."

Snook called the moon a "unique window" to the early solar system,explaining that the lunar surface has been witness to billions of years ofplanetary evolution.

A team of scientists there bouncedmicrowave beams off the craggy bottom of the moon when it wobbled into view— a cycle it repeats about every month. The 3-D radar data gathered with twotelescopes on three separate occasions was used to compile the new map.

"We had the best opportunity in 17 years for these observations,"Hensley said, explaining that the moon's wobble was exaggerated most in 2006when the team made their observations.

Some of the features mapped are so deep that Earth's largest volcano, MaunaLoa in Hawaii, would fit neatly inside some of the craters, Hensley said.

"It's quite impressive topography that we have here," he said.

Doug Cooke at NASA Headquarters in Washington, D.C. said NASA's upcomingLunar Reconnaissance Orbiter (LRO) will soon map the entire moon in even moredetail in the next few years.

"We will be getting better data," Hensley said of LRO, "?butthis [map] is a big step in our understanding of this very interestingplace."

All of the information should be a boon to astronauts who might visit therough terrain of south lunar pole in the future, but in either case Hensleysaid simply sending spacecraft won't allow us to fully understand our lunarcompanion.

"This type of information is critical for us in understanding whatwe're getting into," Cooke said. "? [but] to really understand it, ittakes going there and seeing first-hand what you've got."