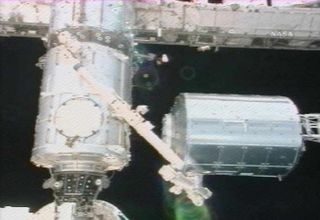 The Columbus laboratory (right) moves closer toward the starboard port of the Harmony connecting node at the International Space Station during a Feb. 11, 2008.
(Image: © NASA TV.)

?Houston,Munich, the European Columbus laboratory module is now a part of the ISS,? saidFrenchastronaut Leopold Eyharts, of the ESA, from the station as the new lab arrivedat 4:44 p.m. EST (2144 GMT).

With theexception of stubborn power cables, which waylaid the spacewalkers for an hour,the orbital work appeared to go smoothly despite a last-minuteastronaut switch that put Love in a slot originally reserved for Germanastronaut Hans Schlegel, of the ESA.

Missionmanagers replaced Schlegel with Love on Saturday due to an undisclosed medicalissue. Schlegel assisted Atlantis pilot Alan Poindexter to choreograph today?sspacewalk from inside the shuttle and is expected to take part in the mission?ssecond spacewalk on Wednesday.

?I thinkthe crew really stepped up to the plate,? said Anna Jarvis, NASA?s leadspacewalk officer for the mission.

Monday?sspacewalk, the first of three planned for Atlantis?planned 12-day mission, began at 9:13 a.m. EST (1413 GMT) and ran sevenhours, 58 minutes in duration. It marked the first spacewalk for Love and thethird for Walheim.

Astronautsplan to open the ESA?s Columbus lab on Tuesday to christen the 27-foot(7-meter) laboratory and outfit it for orbital flight. The new module is about14.7-feet (4.5-meters) wide and adds an extra 2,648 cubic feet (75 cubicmeters) of breathing room aboard the ISS.

?There is asight that everybody in Europe has been looking forward to for a very, verylong time,? said Alan Thirkettle, ISS program manager for the ESA, afterColumbus? installation. ?She looks beautiful.?

Columbus isbuilt to hold a total of 16 equipment racks, 10 of which will be devoted toscientific research. A new ESA control center, based in Oberpfaffenhofen,Germany just outside of Munich, will oversee the module?s daily operations.

?We areopening a new chapter for ESA starting with the utilization of Columbus,? saidESA director general Jean-Jacques Dordain when the modulelaunched last week, adding that European researchers and engineers havespent two decades working for today?s delivery. ?Now they will be able to reapthe benefits.?

In additionto the science racks launched with the module, Walheim and Love will add twoexterior experiments to study the sun and monitor the space environment duringa planned Friday excursion.

ESAofficials named Columbus after Christopher Columbus with the hope of launchingit into orbit in 1992 during the 500th anniversary of the explorer?s historic1492 voyage to the New World. But delays and redesigns to the module, the ISSproject overall and NASA?s recovery from two shuttle disasters pushed the newlab?s launch to 2008.

Eyhartswill spend the next month commissioning Columbus as a member of the station?sExpedition 16 crew. He helped STS-122 mission specialists Leland Melvin and DanTani attach the new lab to the space station using the outpost?s Canadarm2robotic arm.

?Wow, lookat Columbus coming in!? Walheim exclaimed to station commander Peggy Whitsonand other astronauts aboard the ISS and Atlantis. ?Give Peggy a new room forher house.?

Duringtheir spacewalk, Walheim and Love attached a grapple fixture to Columbus toprovide a handle for the station?s robotic arm. They also loosened bolts anddisconnected cables on a spent nitrogen tank serving the station?s coolingsystem, priming it for replacement during a Wednesday spacewalk.

Love alsospotted what appeared to be a ding, possibly caused by orbital debris or amicrometeorite, on a handrail near the station?s Quest airlock.

?Looks to melike a little impact crater,? said Love, adding that the blemish appeared to beabout 2 millimeters in size. ?It is right where everybody grabs on thehandrail.?

MissionControl asked the spacewalkers to photograph the ding as part of an ongoingsurvey of areas that may pose a tear hazard to an astronaut?s spacesuit gloves.

At onepoint, the astronauts caught sight of NASA?s Kennedy Space Center in CapeCanaveral, Fla., while working in orbit.

?What anawesome pass over Florida,? said Love, adding that he could see NASA?s shuttlelanding strip from space. ?Oh, wow. Fabulous!?