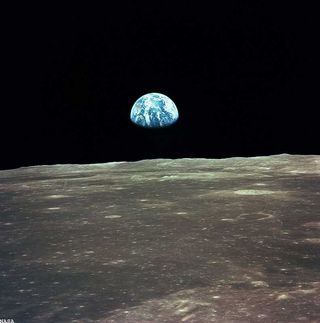 This view of the Earth rising over the Moon's horizon was taken from the Apollo spacecraft. The lunar terrain pictured is in the area of Smyth's Sea on the nearside. Coordinates of the center of the terrain are 85 degrees east longitude and 3 degrees north latitude.
(Image: © NASA.)

NASA'sgreatest missions are about to get a high definition makeover by the DiscoveryChannel this year to commemorate the U.S.space agency's 50th anniversary.

"WhenWe Left Earth: The NASA Missions," a miniseries that follows Discovery?s popular"Planet Earth" series, will showcase 50years of space exploration. The series includes some never-before-seen filmculled from 500 hours of footage plucked from NASA's archives and carefullyrestored for broadcast in high definition (HD).

"Nogimmicks, no photoshopping, no CGI," said John Ford, president and generalmanager of Discovery Channel, in a preview webcast from the newly openedDavidson Center for Space Exploration in Huntsville, Alabama.

"I wasso excited during the entire 11 days [of the mission] that it bubbled up,"Duke said, describing himself and fellow Apollo 16 astronaut John Young as"two little five-year-olds running around" and comparing their anticswith those of his grandsons.

Duke alsonoted that one grandson owns an iPod with "a million times morecomputational power than what we had" on the lunar landing missions, whichlaunched between 1969 and 1972.

"Wedid pretty well with what we had," Aldrin added.

A 10-minutepreview clip of the upcoming Discovery Channel series highlighted the thrilland danger of the Apollo missions set against the Cold War's space race, with astunning sequence of the 36-story SaturnV rocket roaring spaceward while burning 20 tons of fuel per second.

NASA will returnto the moon with its Ares rockets and Orion spacecraft that are slated toreplace the aging space shuttle. However, the shuttle's retirement in 2010leaves a five-year gap in spaceflight capabilities until the new spacecraftcome online.

"Iwould hope we have the national will and political will to get through this dryspell while we point back towards the moon," Duke said. He favored a"balanced" NASA approach between manned missions and unmanned roboticexploration.

"Marsis where we need permanence," Aldrin said. "We need to go to the moonto learn how to go to Mars, but to establish [lunar] permanence will maybeabsorb too many resources."

Bothastronauts observed that space exploration has not only pushed thetechnological envelope, but has also benefited ordinary Americans and peopleacross the world.

"There'snot one area of our life that has not been touched by space agetechnology," Duke said.

Although theastronauts were enthusiastic when asked about audiences getting to view spaceexploration in HD, Aldrin noted one downside.

"Wedon't have makeup people who go along with our crew," Aldrin said.

"WhenWe Left Earth: The NASA Missions" will air as a six-hour special onconsecutive Sundays, June 8, 15, and 27.