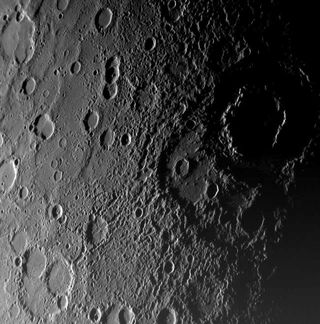 Scientistsare sifting through their first new views of the planet Mercury in more thanthree decades thanks to images beamed home by NASA?s MESSENGER probe.

Thecar-sized spacecraft zippedpast Mercury in a Monday flyby and is relaying more than 1,200 new images andother data back to eager scientists on Earth.

?Now it?stime for the scientific payoff,? MESSENGER principal investigator Sean Solomonof the Carnegie Institution of Washington told SPACE.com after the flyby.?It?s just a complete mix of results that we?re going to get.?

In one newimage, released today, the planet?s stark surface is shown peppered with smallcraters, each less than a mile (1.6 km) in diameter and carved into an areaabout 300 miles (482 km) across. MESSENGER used its narrow-angle camera tophotograph the scene, which is dominated by a large, double-ringed craterdubbed Vivaldi after the Italian composer. While the crater was last seen by NASA?sMariner 10 probe, MESSENGER?s camera observed it with unprecedented detail,researchers said.

Another newview reveals the first look at the half of Mercury left uncharted by Mariner10.

?It isalready clear that MESSENGER?s superior camera will tell us much that could notbe resolved even on the side of Mercury viewed by Mariner?s vidicon camera inthe mid-1970s,? said MESSENGER researchers at the Johns Hopkins University?sApplied Physics Laboratory (JHUAPL) in a Wednesday statement. JHUAPL engineersbuilt MESSENGER for NASA and are managing its $446 million mission for thespace agency.

MESSENGER,short for MErcury Surface, Space ENvironment, GEochemistry, and Ranging,trained its seven instruments on Mercury on Monday for the first of threeplanned flybys to guide itself toward a March 18, 2011, arrival into orbitaround the small, rocky planet. The mission is the first to visit Mercury since1975, when Mariner 10 made its third and final swing past the planet.

?Theseflybys are the only time that we fly by the surface of Mercury at low latitudenear the equator,? Solomon said.

MESSENGERis due to make a second rendezvous at Mercury in October, then swing by onthird pass in September 2009. The probe launched in August 2004 and flew byEarth once and Venus twice during its 4.9 billion-mile (7.9 billion-kilometer)trek toward Mercury orbit.

DuringMonday?s flyby, MESSENGER skimmed just 124 miles (200 km) above Mercury?ssurface and snapped photographs of about half of the estimated 55 percent ofthe planet that remained uncharted after Mariner 10?s mission. In addition toimagery, the probe is expected to return a wealth of new observations made byits seven instruments to scrutinize Mercury?ssurface composition, magnetic field, tenuous atmosphere, unusually highdensity and other features.

?It willtake upwards of a week to get all of the data off the spacecraft,? saidMESSENGER systems engineer Eric Finnegan before the Monday flyby. ?Within thatweek, the scientists will start receiving some of the images of the flyby andprocessing that data.?

Researchershope MESSENGER?s findings will not only answerlong-standing questions about Mercury, but also shed new light on howplanets formed in the early days of the solar system. The probe will generatecomplete maps of Mercury?s surface, measure the planet's gravitational fieldand search for any hints of ice at the bottom of permanently shadowed cratersnear the poles as part of its mission.

?I just can?twait,? said Mark Robinson, a MESSENGER science team member at the University of Arizona. ?I want to see what?s around the corner.?