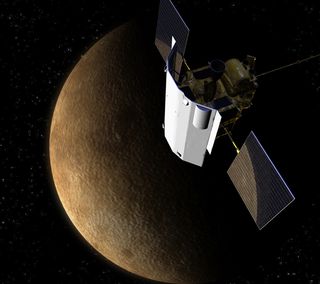 An artist's interpretation of the MESSENGER spacecraft's encounter with the planet Mercury.
(Image: © NASA/JHUAPL/Carnegie Institution of Washington.)

LAUREL, Md. - For thefirst time in 33 years, a space probe zoomed by the planet Mercury with camerasblazing on Monday while eager scientists looked on from Earth.

?It wentright according to script, so that was very comforting,? MESSENGER principalinvestigator Sean Solomon, of the Carnegie Institution of Washington, told SPACE.comafter the flyby.

MESSENGER -short for MErcury Surface, Space ENvironment, GEochemistry, and Ranging - skimmedjust 124 miles (200 km) over the surface of its target planet during the firstof three planned flybys to guide the spacecraft toward an eventual orbit aroundthe small rocky world on March 18, 2011.

Not sinceNASA?s Mariner 10 probe, which flew past Mercury three times between 1974 and1975, has a spacecraft taken such a close look at the planet. Researchers hopeMESSENGER?s $446 million mission will answerlong-standing questions over Mercury?s oddly high density, magnetic field andthin atmosphere, as well as shed new light on how planets formed during thesolar system?s infancy.

?To understand the excitement of the scientists, you have tothink of this as the first Super Bowl in 30 years,? said Marilyn Lindstrom,NASA?s MESSENGER program scientist, before the flyby. ?We?ve been waiting to goback to Mercury that long.?

Mariner 10,for example, only mapped about 45 percent of Mercury?s surface duringits three flybys. MESSENGER turned its cameras and other instruments onhalf of the planet?suncharted surface during today?s flyby and will ultimately spend an entireyear in orbit around the planet.

?The realquestion is, ?Does it all look the same??? said Rob Gold, MESSENGER?s sciencepayload manager at the Applied Physics Laboratory. ?We just don?t know.?

If all goeswell, MESSENGER will begin beaming more than 1,200 new images of Mercury backto Earth along with other data around midday tomorrow.

MarkRobinson, a science team member from the University of Arizona, said he islooking forward to MESSENGER?s views of the Caloris Basin, a large impactcrater that Mariner 10 only saw half of during its flight.

A vitalsunshade, just one example of advances in technology between the Mariner 10 andMESSENGER missions, allows the new probe to keep its sophisticated instruments atabout room temperature while the sun-facing side reaches a scorching 600degrees Fahrenheit (315 degrees Celsius).

?It?s like takinga 2008 Jaguar and comparing it to a six-year-old?s toy bike,? Stern said of theimprovements since Mariner 10.

Mission scientists said they are alreadyplanning MESSENGER?s next Mercury flyby, set for October, and expect thespacecraft to finish relaying all of the imagery and other data from today?s rendezvousby next week.

?I will bejust simply chomping at the bit to see data that come down,? said Faith Vilas, aMESSENGER participating scientist and director of the MMT Observatory in Mt. Hopkins, Ariz.

Monday?s flyby marked the fourth planetary pass for MESSENGER, which has swungpast Earth once and Venus twice since its August 2004 launch. The successof those previous flybys gave mission controllers vital experience for today?s rendezvous,mission researchers said.