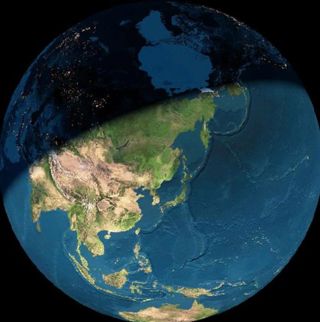 View of Earth from the perspective of the approaching Quadrantid meteoroids at 2h UTC on January 4, 2008.
(Image: © SETI Institute)

Ifall goes to plan, my research colleagues and I will have front row seats tospectacular New Year fireworks. These are not the artificial bangs and whistlesthat shoot a few hundred yards into the sky, but the awe-inspiring impact ofcosmic dust moving at astronomical speeds. These bits of comet dust travelthrough space faster than Santa's sled, spanning the distance from Los Angeles to New York in a mere minute and a half. When they hit Earth, the impact of agrain of sand shines so brightly it can be seen for hundreds of miles around.They are called "meteors."

Thesecelestial New Year's fireworks will be a few days later than our normalcelebration. The annual Quadrantidmeteor shower will have its peak in the early morning of January 4. In someyears, this is our most intense annual shower with peak rates of over 100visible per hour. The waning moon will not disturb viewing too much.

TheQuadrantids elude regular observations because the shower is visible only fromthe Northern Hemisphere, where the weather in early January is usually brutal.Moreover, the shower radiant (the direction from which the meteoroids approachus) sinks below the horizon before midnight at many sites, only to rise againin the early morning hours. This means that the shower is normally weak in theearly evening, absent around midnight, and best seen only for a few hours inthe early morning. That is, if the peak of the shower happens in the pre-dawnhours, but we do not know for certain when the shower peaks.

Unfortunately,our calculations show that the peak of the shower may well vary by as much as 7hours. With a shower that is only 8.5 hours wide, that uncertainty is a realproblem.

TheQuadrantid shower is typical of most other known meteor showers in that thereis no known active parent comet. Searches for the parent body that produced theQuadrantids were fruitless until 2003, when I identified the near-Earthasteroid 2003 EH1 as the likely source of the Quadrantid shower. But 2003 EH1is not an active comet. Instead, I suspect that the stream originated from abreakup event some 500 years ago. Between December 1490 and February 1491,observers in China, Korea, and Japan spotted a comet C/1490 Y1 that moved inthe same plane as the Quadrantids. Could this have been the moment of breakup?And what type of breakup was involved?

Oneway to find out when and how the Quadrantid stream was created is to measurehow strong Jupiter perturbs thestream. The orbit of the Quadrantids is steeply inclined, with one node atEarth's orbit and another at Jupiter's orbit. If the stream is as young as 500years, as I think, then the stream is still narrow when it passes by Jupiter'sorbit. Jupiter's influence will be enormous, changing both the peak time andthe peak rate from year to year. For 2008, our best model for dust ejectedduring a breakup in 1490 predicts a peak at about 2h UTC on January 4. In thatcase, the best viewing would be over Europe and western Asia.

Tosee how many meteors to expect from your own observing site, if the peak is at2h UTC, check out the website: http://quadrantid.seti.org

Onthe other hand, the shower could be more diffuse at Jupiter's orbit, because itis older, or because the breakup generated a wider range of orbits than in ourmodel. In that case, the stream should return much the same year after year. In1997, the shower appears to have peaked at solar longitude 283.20, which wouldtranslate to 07:37 UTC on 4 January 2008. In that case, the shower should bestrongest in the early morning hours of January 4 over the Eastern USA.

Weplan to find out. Fourteen researchers from NASA Ames, the SETI Institute,Lockheed Martin, Caltech, and other institutes are gearing up for an excitingmission. Just last week, we received the green light to observe the Quadrantidshower from a Gulfstream V aircraft in a mission similar to our campaign tostudy the September 1 Aurigids.The aircraft will bring us to 47,000 ft, above most of the weather. If all goesto plan, we will leave San Jose in the late afternoon of January 3 and flynorth. While the Earth rotates and forces the radiant to move lower to thehorizon, we will move to compensate by flying to higher latitudes. Once theradiant has reached its lowest point, we turn around and fly back. This way, wekeep the radiant throughout the flight between 15 and 25 degrees elevation.

Thiswill be the first time that the Quadrantid shower will be observed under nearlyconstant observing conditions for over 9 hours. We will soon know whichscenario holds. We hope that next year, the peak time of the Quadrantid showerwill no longer be a mystery and we can confidently invite all of you to join usin nature's own way of starting the new year with a bang. First updates of themission will be posted at: http://quadrantid.seti.org.