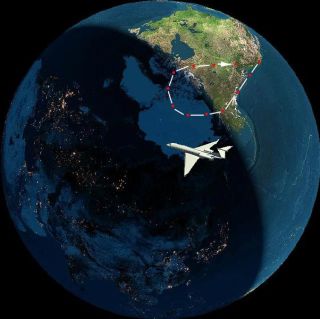 View of Earth from the perspective of the approaching Ursid meteoroids on December 22, 2007, at the time of the predicted outburst.
(Image: © SETI Institute)

We arepreparing to visit the North Pole on December 22, to see an unusual meteorshower called the Ursids. This meteor shower radiates from the constellation knownas the Little Dipper: Ursa Minor. This minor shower is quite unremarkable inmost years, but this year the parent comet 8P/Tuttle is approaching, and it hasa strong Perseid-level shower in store for us. Wethink. We predict a peak time around 20 - 22.2 Universal Time and a width of 5to 8.5 hours at half the peak rate.

Unfortunately,that means that North America is not a good place to be, for our purpose. The outburst willhappen during our daytime. Best viewing will be in Asia and Europe. Even fromthose locations it won't be easy to see this shower, because of a bad moon thatnight, and frequent bad weather in December. There is a reason why people wantto huddle indoors around a warm fire and a Christmas tree this time of year.

The Ursidoutburst is too rare an opportunity to miss, though, because the cometreturns only every 13.6 years. This time around, the comet comes closer to usthan ever before, at least since it was discovered in 1790, passing at only0.25 AU on January 5. This is still a big distance, though, making for no morethan a nice binocular comet. The meteoroids bring the comet to us and permitstudies of the comet's composition and activity history. The meteoroids willhit at a speed of 35 kilometers in a second and can damage satellites in orbit.It is a good thing that the stream is pretty diluted when it reaches Earth.

The Ursidoutbursts are somewhat of a mystery. They have been heard, more than seen, inthe years around past returns of the comet, by people listening for distantradio stations. Each time a meteor appeared in the cold winter sky, it would createa trail of ions, which reflected radio waves to the observer. They would hear abrief "ping". While counting those pings, it was clear to those listeners that somethingunusual was happening on December 22 in some years.

In collaborationwith Esko Lyytinen of Helsinki, Finland, and Jeremie Vaubaillon of Caltech, Iinvestigated these reports, and we discovered that the dust may have beenejected by comet Tuttle around AD 300 to 900, or perhaps earlier. Results willbe published in the upcoming December issue of the Journal of theInternational Meteor Organization. It takes a long time for the dust tomove from an orbit similar to that of the comet into an orbit that can hitEarth. Close encounters of Jupiter near the ascending node of the comet orbitseem to play an important role, especially when they occur shortly after thedust has been ejected and is still concentrated in space. The dust itself ismost affected when its motion around the sun "rings," or resonates,with that of Jupiter.

Theupcoming outburst is a great opportunity to test this model. When the Earthtravels through the stream of dust, we may hope to see the dominance of someparticular returns of the comet in the past, when all the dynamics worked inour favor. This could cause a particular peak time and rate profile of theshower.

Toinvestigate this, we are hoping for an opportunity to observe the outburst froma Gulfstream V aircraft in a mission similar to our campaign to study theSeptember 1 Aurigids. If approved, the Ursid flight will be a long 16-hourmission, involving one aircraft, departing from NASA Ames Research Center in the early morning of December 22nd. The plane will fly north-west towards Alaska, land in Anchorage for a refuel stop, and then continue on to follow the Earth'sshadow, fly over the Arctic and turn towards Canada to return at Ames just after sunset. We don't need to fly all the way to the North Pole, just farenough north to stay in darkness all the time. The aircraft will follow theEarth's rotation, making the meteors fall from a radiant high in the skythroughout the mission. The moon will stay low on the horizon on one side ofthe plane. The mission is described at: http://ursid.seti.org.

Theobservations are also expected to yield data on the parent comet itself. We canmeasure the relative content of sodium, magnesium, iron and some otherelements. We can measure the range and frequency of meteoroid sizes, andcompare that to what astronomers observe to come off comet Tuttle today.Perhaps we will learn about how meteoroids survive the conditions of space.

I havealready received great pictures of the approaching comet 8P/Tuttle. The bestwill be posted at: http://ursid.seti.org/index-8P.html. Thecomet is now in the constellation of Cepheus and moving south. This comet iswithin reach of binoculars and should reach naked-eye brightness, aroundmagnitude +5.7, in early January. Observing programs to study this comet are scheduled for theHubble, Spitzer and Chandra space telescopes, as well as from many ground-basedobservatories.

The cometis as big as comet Halley, but not quite as brightbecause it does not emit the same amount of tiny dust grains that scattersunlight efficiently, and create a haze around the comet. Instead, the cometreleases large dust grains that, many centuries later, evolve into orbits thathit Earth and create the mysterious Ursid meteor shower.