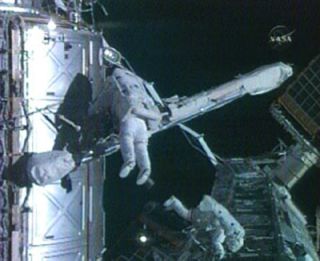 "Wowit's almost a full moon," said Whitson, Expedition 16 commander and leadspacewalker as she ventured outside of the station?s Quest airlock at 4:50 a.m.EST (0950 GMT).

"Yeah,I've been watching the past couple nights and it's very close," said Taniof the waxing lunarspectacle.

The seven-hour, four-minute spacewalkmarked the third in 15 days for the station?s Expedition 16 astronauts and servedas the finish line for a work marathon that began with a Nov. 9 excursion justafter NASA?s shuttle Discovery left the ISS.

Discovery?s STS-120crew delivered Harmony to the ISS, but it was up to Whitson, Tani andcrewmate Yuri Malenchenko to move the node to its current perch at the front ofthe station?s Destiny lab. There, Harmony will serve as the hub for Columbus and a Japanese laboratory slated to launch next year.

?What we?veaccomplished in the last 15 days is the equivalent of a very ambitious shuttleassembly mission,? said ISS flight director Derek Hassmann after the spacewalk,adding that the three Expedition 16 crew achieved on their own what a team ofup to 10 ISS and shuttle astronauts would normally tackle. ?Quite honestly, Iam just very pleasantly surprised that everything went as well as it did.?

While muchof Saturday?s spacewalk chores mirrored those performed by Whitson and Tani in aTuesday excursion, mission managers did add a new task to their orbitalto-do list: the inspection of massive gear that turns the station?s starboardsolar wings like a paddlewheel to face the sun.

"I seethe same damage I saw on the other panel," Tani said. "In fact, Iwould say there are more shavings here. Again, it looks exactly like ? there'sthis obvious magnetic attraction."

Stationflight controllers have moved the starboard gear only sparingly to avoidfurther damage, but its counterpart on the station?s port side continues toperform flawlessly and showed no signs of contamination during a previousspacewalk inspection.

Tani andWhitson said it appeared that one of the starboard gear?s two bearing racerings appeared to be pitted or damaged.

Thestarboard SARJ gear will likely have to be repaired before the major componentof Japan?s three-segment Kibo laboratory can be installed at the ISS next year,but mission managers said any attempt to fix the joint can wait until afterDecember?s planned shuttle flight. Depending on the nature of repair required,the effort could take up to four extra spacewalks, but understanding the fullextent of contamination is vital before any attempt is staged, NASA has said.

?I considerthat to be, as it turns out, one of the key accomplishments of today?sspacewalk,? Hassmann said of the Expedition 16 crew?s SARJ inspection.?Basically, the damage is significant and it is widespread.?

"This is harder thanlast time," Tani said as he gripped the bulky tray, comparing it to his wranglingwith an identical component on Tuesday's spacewalk.

Whitson also removed aseries of launch restraints on the Harmony and finished hooking up the station?spower transfer that allows visiting shuttles to feed off the ISS power grid. Theastronauts began their spacewalk more than one hour early and managed a fewextra tasks, including the installation of an exterior flood light and settingup tools for spacewalks planned during December?s shuttle flight.

Saturday?s spacewalk markedthe 99th dedicated to space station construction and the fourth careerexcursion for both Whitson and Tani. By the end of the activity, Whitson rackedup 25 hours and 40 minutes of spacewalking time while Tani ended with 25 hoursand five minutes.