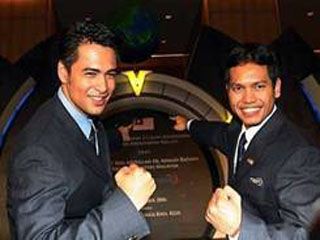 STAR CITY, Russia (AP) --Among the things Malaysia's first astronaut will be worrying about next month:How does an observant Muslim pray toward Mecca while soaring hundreds of milesabove the Earth?

They blast off from theRussian-leased Baikonur Cosmodrome in Kazakhstan on Oct. 10.

Speaking at a newsconference Thursday at Russia's cosmonaut training center in Star City, onMoscow's outskirts, Shukor said during his 10 days in space, he hoped toperform life science and other research, but said he would not ignore theresponsibilities of his faith.

"I do agree that I ama Muslim, I am Islamic, but my main priority is more of conductingexperiments,'' the 35-year-old astronaut said. "As a Muslim, I do hope todo my responsibilities, I do hope to fast in space.''

Observant Muslims arerequired to turn toward Mecca -- located in Saudi Arabia -- and kneel and prayfive times a day. However, with the space station circling the Earth 16 times aday, kneeling in zero gravity to pray -- or facing toward Mecca for that matter-- makes fulfilling those religious obligations difficult.

Malaysia's National FatwaCouncil ruled that Muslim astronauts will not be required to kneel to pray ifthe absence of gravity makes it too hard. Facing Mecca while praying will beleft to the "best abilities'' of the astronaut, the council said.

Adding to the difficultiesis the fact that the launch coincides with the Muslim holy month of Ramadan -- whenMuslims are expected to fast from dawn until dusk. The fatwa decided thefasting may be postponed until returning to Earth.

Shukor will return to EarthOct. 20 along with two members of the station's current crew -- cosmonautsFyodor Yurchikhin and Oleg Kotov.