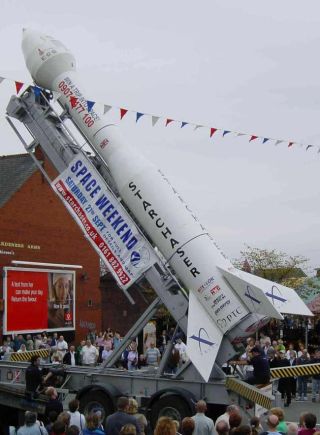 The Nova/Starchaser 4 rocket, built by the UK-based firm Starchaser, Ind., is a single-seater rocket is some 37 feet (11 meters) tall â€“ sure to be an eye-catcher at the expo.
(Image: © Starchaser Industries)

The Wirefly X PRIZE CUP '07 Holloman Air and Space Expo is being held October 27-28, staged at the Holloman Air Force Base in the city of Alamogordo, New Mexico.

"It'll be a cool show," said Bretton Alexander, Executive Director of Space Prizes and the Wirefly X Prize Cup in Washington, D.C. "There won't be as much down time, if you will, that there has been in the past. It will be far more dynamic," he said, noting that the event will involve more performances, presentations and displays than ever before.

In the past two years, X Prize Cup activities were held in Las Cruces, New Mexico. This year's larger venue covers some 30 acres with ground displays featuring spaceships, U.S. Air Force aircraft, robots and rovers, along with Jumbotrons to enable those attending to keep an eye on all the action.

In many ways, the annual Wirefly X Prize Cup provides a status check on the blossoming variety of private space travel ventures. As example, prior to the expo, the Third International Symposium for Personal Spaceflight will take place October 24-25 at the New Mexico Farm and Ranch Heritage Museum in neighboring Las Cruces, New Mexico.

"The personal spaceflight industry is alive and well. We continue to have significant and growing private investment," said Peter Diamandis, Chairman and Chief Executive Officer of the X Prize Foundation, headquartered in Santa Monica, California.

Diamandis said that the next major milestone is the routine commercial operations of these new systems leading up to the first successful Initial Public Offering, or IPO.

"Once one of these commercial space companies conducts a vibrant IPO I think we'll have what I've been calling a 'Netscape event' where in investors will stand up and take notice and capital will begin to flow into the pre-IPO space companies," Diamandis predicted.

"We are going to be displaying our Nova rocket this year, in collaboration with Doña Ana Community College (DACC), a branch of New Mexico State University," said Steve Bennett, head of Starchaser Industries. The Nova/Starchaser 4 is a single-seater rocket is some 37 feet (11 meters) tall – sure to be an eye-catcher at the expo.

The UK-based Starchaser Industries Limited is currently working on larger versions of this rocket that will be used for space tourism purposes. Furthermore, the company's New Mexico development at Starchaser Rocket City is progressing well. A twenty thousand gallon water storage facility will be installed close by, which will allow the construction of Starchaser's 10,000 square foot rocket manufacturing and assembly building.

On October 26, thousands of students from schools from across the United States will attend the Wirefly X Prize Cup education day at Holloman Air Force Base for rocket launches, astronaut sessions, career panels, and competitions, Alexander said.

Another student-outreach initiative is the Pete Conrad Spirit of Innovation Award, asking high school-aged students to develop a new, innovative concept to benefit the personal spaceflight industry within the next 50 years. The award is named after Conrad, the late astronaut who flew Gemini and Skylab missions, and commanded the Apollo 12 landing on the Moon.

Prizes on the line

A major expo attraction will be the Northrop Grumman Lunar Lander Challenge. The event involves rocket teams vying for $2 million in prize money, flying their respective lunar lander ships through the sky to touchdowns on simulated lunar surface landscape — under time constraints.

NASA, which signed a Space Act Agreement with the X Prize Foundation before last year's competition will once again fund the prizes through the space agency's Centennial Challenges program – an effort that promotes technical innovation through prize competitions.

This year's Northrop Grumman Lunar Lander Challenge is shaping up well, said William Pomerantz, Director of Space Projects for the X Prize Foundation in Washington, D.C. Rocketeers will demonstrate the ups and downs of carrying out simulated lunar lander flights with the $2 million in prizes on the line, he said.

"All told, our teams have spent about 35,000 man-hours, almost all of them volunteered, working on this challenge thus far," Pomerantz added. "And what a great investment for NASA — they've gotten 35,000 man-hours and countless innovations and solutions, and haven't spent a single dollar thus far," he emphasized.

On tap is an integration of rules from the Federal Aviation Administration's Office of Commercial Space Transportation, the National Transportation Safety Board, X Prize, as well as Holloman safety regulations that govern operations on the base, Eiland noted.

Rocket teams taking part in the Challenge that do not fully meet the necessary free-flight requirements prior to the Air and Space Expo may be required to do tethered launches, Eiland said.

"The opportunity to partner with X Prize helps round out the picture of telling the air and space revolutions that have taken place over the last 50 and 60 years," Eiland told SPACE.com. Given the melding of top aviation and private space innovation, he added that the upcoming two-day Holloman Air and Space Expo could see an audience of 100,000 people flooding through base gates.

The schedule of events is tightly packed, alternating between space and rocket activities to aircraft takeoffs, flyovers, and landings. Slated for public viewing are mission-ready F-117A Stealth Fighters, for example, and the F22-Raptor.

"I think it's going to present sensory overload," Eiland explained. "The biggest challenge that I see, logistically, is just giving people a break so they can use the restroom or have a meal."

For detailed information and updates regarding the 2007 Wirefly X Prize Cup, go to the Internet web site: http://space.xprize.org/x-prize-cup/