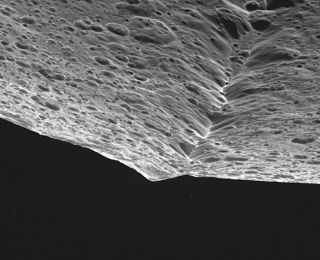 A new view of the Saturn moon Iapetus, as seen by the Cassini spacecraft. Here, an odd walnut-like mountain range is shown along the moon's equator.
(Image: © NASA/JPL/Space Science Institute)

In spite ofthe meteoric blemishes covering the face of Saturn's moon Iapetus, thewalnut-shaped celestial body was the subject of another photo shoot by theCassini spacecraft.

Mission scientists are now poring overhundreds of snapshots made during the spacecraft's closest-ever flyby withIapetus this week,which show its "yin-and-yang" contrastive halves and strange mountainrange in great detail

"Theimages are really stunning," said Tilmann Denk, a Cassini imagingscientist at the Free University in Berlin who began planning the photo shootseven years ago.

The photos traveled947 million miles (1.52 billion kilometers) to reach Earth from Saturn'svicinity and were taken only 1,000 miles (1,640 kilometers) from thesurface--100 times closer than Cassini's 2004 flyby.

Close-upsof Iapetus' hemispheres are revealed by the images: a white half resemblingsnow and a second half as black as tar. The snapshots also show the ridge ofmountains 12 miles (20 kilometers) high along Iapetus' equator, whichscientists have recently tried toexplain.

"Iapetusprovides us a window back in time, to the formation of the planets over fourbillion years ago," said Torrence Johnson, a Cassini imaging team member atNASA's Jet Propulsion Laboratory in Pasadena, Calif. "Since then its icycrust has been cold and stiff, preserving this ancient surface for ourstudy."

A blast ofgalactic cosmic rays delayed delivery of Cassini's latest work by several days,but the spacecraft automatically entered into a protective "safemode" after the event, according to a statement released by NASA. Had theenergetic blast arrived a few days sooner, however, the close-up imagingopportunity may have been lost due to the temporary shut-down.

NASA saidthat Cassini is operating normally, and its scientific instruments "areexpected to return to normal operations in a few days."

"There'snever a dull moment on this mission," said Bob Mitchell, Cassini programmanager at JPL. "We are very excited about the stunning images beingreturned. There's plenty here to keep many scientists busy for manyyears."